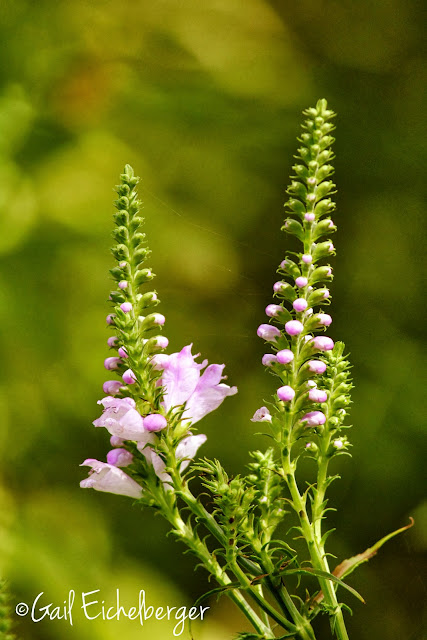 Earlier this month False Dragonhead began it's charming bottom up bloom. It didn't take long for the Bumbles to arrive on the scene.
Mother Nature designed Physostegia virginiana, aka, False Dragonhead with bumblebees in mind. The tubular flowers are perfect for plump little bee bodies to slip right in to find the sweet spots of nectar and while pollinating the flowers.
Although, Bumbles are the primary pollinators of False Dragonheads, many other pollinators stop by to visit. Swallowtail Butterflies and Silver spotted skippers with long proboscis can reach far into the corolla for nectar and Carpenter bees, although, much too large to fit into the corolla, cleverly drill directly into the flower side to get at the nectar. 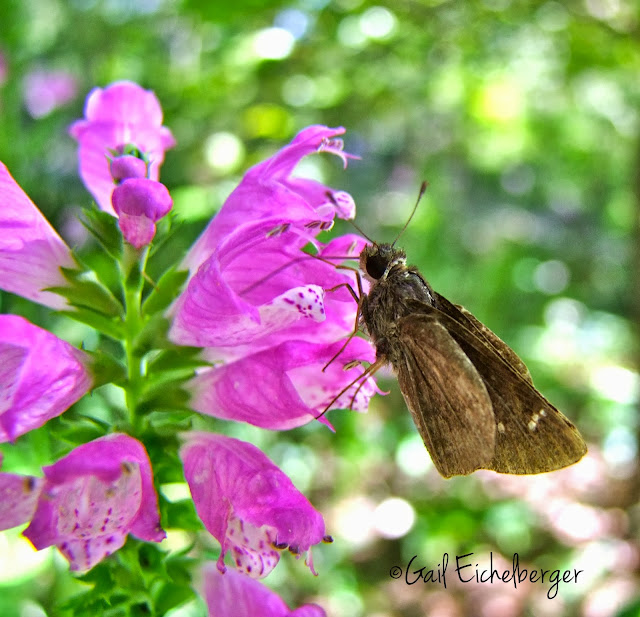 I was introduced to Physostegia virginiana years ago as False Dragonhead and the name has stuck with me. I have since learned that many people know it by Obedient plant, a misnomer if I've ever heard one! This plant is anything but obedient, but, I digress and will get back to that topic a little later. It's called Obedient Plant because flowers, when pushed from their normal position, are supposed to remain for a while where they have been turned. The common name dragonhead alludes to the open mouth of the corolla which was thought to resemble the fabled beasts of yore!
False Dragonhead is a clump-forming North American native perennial that is found in fields, prairies, thickets, woodland openings and borders, along rivers and streams and lakesides in much of the eastern and central United States, as well as eastern Canada.  In other words, it prefers a moist spot in full sun or part shade! This member of the mint family typically grows 2-4' tall on stiff, square stems and features spikes of pinkish, tubular, lipped, snapdragon-like flowers which bloom in my garden during September and early October, just in time for late arriving pollinators which are making a mad dash to collect as much nectar and pollen for their last brood.
False Dragonhead or dis-Obedient plant has a reputation for being an aggressive spreader in a garden setting. That is true, but, I don't mind its colonizing manner, it's a plant that looks better massed and what better way to get a large planting then to have it cooperate so well. I find they divide easily and there are plenty of plants for other spots in the garden or to share with friends. If you find it too aggressive you can plant it in a dryer garden spot or cut the flowers off before it goes to seed. You might even get a second flush of blooms, too.
Despite it's colonizing tendency, False Dragonhead is an immensely popular garden flower and several cultivars have been developed, some with variegated foliage and others are said to be less aggressive. It's really an outstanding plant that lights up the garden and looks especially gorgeous with grasses, sedges,  ex-asters, late blooming phlox, boltonia and goldenrods.
Don't be put off by Physostegia virginiana's reputation as an aggressive plant. Yes, it's quite the colonizer in moist situations, but, it's well worth a little weeding and pulling out extra plants. It's a beauty and "a wonderful plant to add luminous rosy lavender late season color to the bronze golds and yellows of a moist meadow" or garden (source) and something that's becoming increasingly important to many of us, it's not a preferred deer food!

Welcome to Clay and Limestone's Wildflower Wednesday celebration. WW is about sharing and celebrating wildflowers from all over this great big, beautiful world. Join us on the fourth Wednesday of each month. Remember, it doesn't matter if they are in bloom or not; and, it doesn't matter if we all share the same plants. It's all about celebrating wildflowers. Wildflower Wednesday participants, please leave a comment when you add your url to Mr Linky.