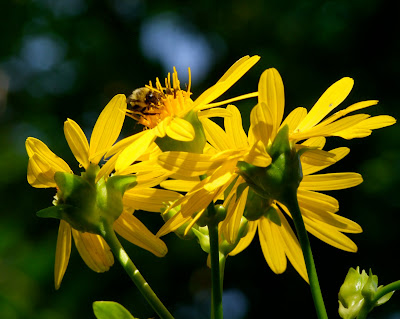 Silphium perfoliatum, also known as Cup Plant, is a member of the Aster family (Asteraceae). It's a native wildflower of Tennessee's tall grass prairie. My little 'prairie' of Black Eyed Susans, liatris, veronicastrums, Joe-Pye Weed, native asters, Butterfly Weeds, friendly exotics and native grasses is punctuated by the cup plant's big statement~ It's well over 7 foot tall and could top out at 10! To me it's the right plant in a most interesting place. 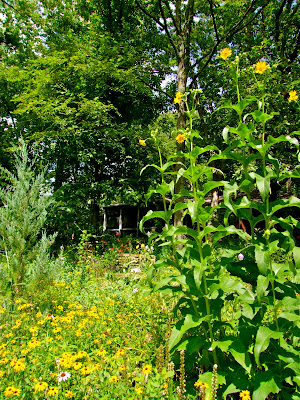 It's been here for several years (Cup Plant Pictorial) and is beginning to make a really big show! The above photo shows it growing straight and tall after a summer of intense heat and plenty of sun. It is living up to its tap rooted reputation (The root system consists of a central taproot, and abundant shallow rhizomes that help to spread the plant vegetatively, often forming substantial colonies~ Illinois Wildflowers) and has found purchase in the shallow soil and worked its way through cracks in the limestone bedrock. It's increased in size, but not exponentially! This garden is anything but loamy and moist and the limestone bedrock it's planted amidst ought to keep it in check! I'm sure it will be here for the garden equivalent of forever! 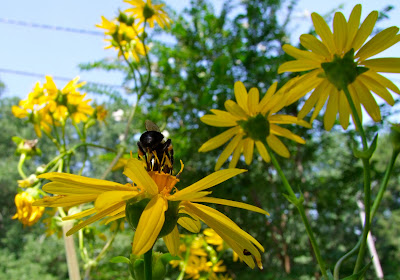 News has come from South Dakota State University that cup plant is under consideration/study as a biomass crop plant! It can store carbon in its massive root system....and yes, the words 'massive root system' do give me pause to wonder, especially since it's tap-rooted in my garden! 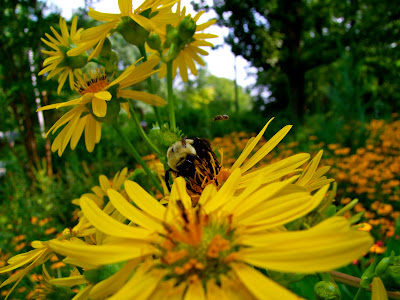 Interesting news, but I grow it because it increases bio-diversity in my garden. It's a good food source for many kinds of bees, wasps, flies and goldfinches. It provides a safe perch for insects and birds to rest during the heat of the day. 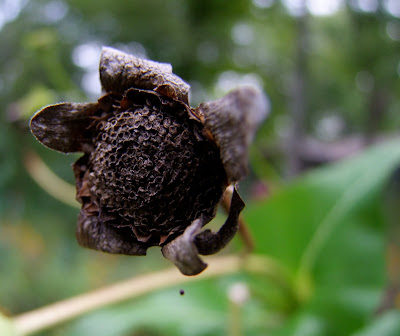 The seeds are especially attractive to those same visiting goldfinch later in the season. 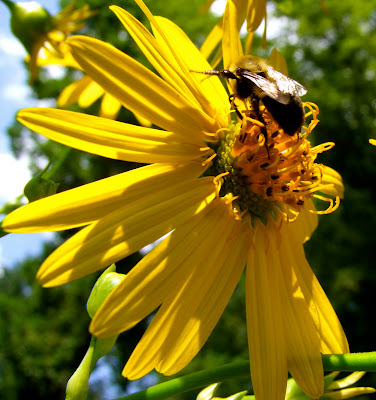 I like the cup plant~but, then I am partial to prairie plants and this one with its cheerful daisy like flowers on stout 8 foot tall stems has charmed me. 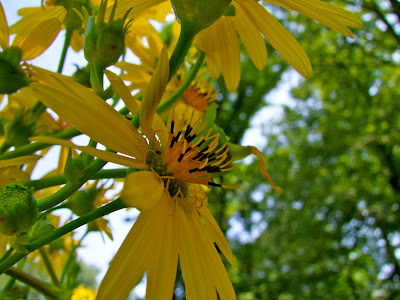 The cup plant gets its common name from the large sandpaper rough leaves that are opposite and fused to form a cup around the square stem. Rain and dew collect in the cups. 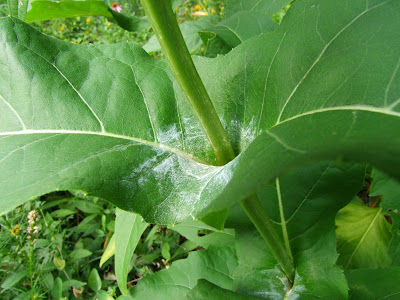 I've seen wasps, bees and goldfinches stop by for a drink and I've accidentally tipped the water all over myself when weeding nearby. 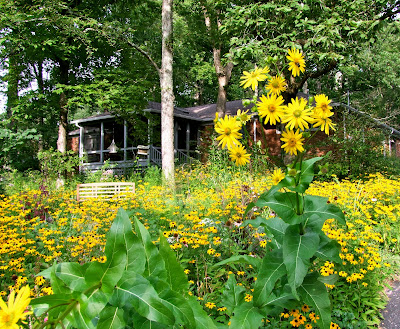 This plant seems bullet proof~No diseases or pests bother it. The only problem is the wind and then if it's growing on a slope like the one at C&L. Last year (above photo) heavy winds caused it to topple over. So far this year, it's growing straight and tall. Give it room to grow, full sun, average to moist soil and be prepared if you have ideal conditions for its 'unstoppable urge to reproduce'. 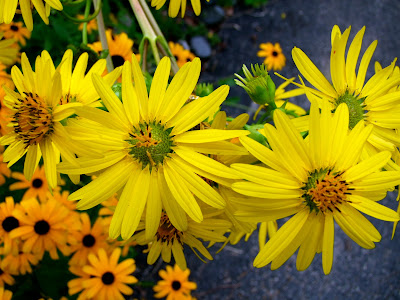 Try the cup plant~Remember, it's a big plant and makes a big statement~You could even say the beauty is a beast.


Thanks for stopping by to celebrate Wildflower Wednesday. It's all about sharing wildflowers/native plants no matter where you garden in the blogasphere. It doesn't matter if we sometimes show the same plants. How they grow and thrive in your garden is what matters most.

I hope you join the celebration..It's always the fourth Wednesday of the month!