Life Happens To a Garden... 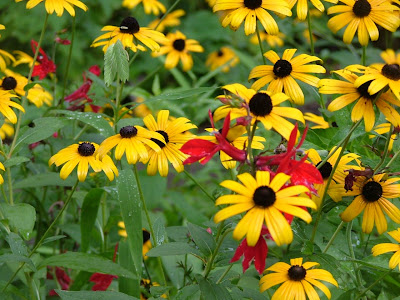 Last March, Doris, a member of our local perennial plant society garden tours committee asked me to put my garden on the 2009 tour. I said, "Doris, my garden is not the garden you visited, it's not up to a tour." She replied rather matter of fact, "Well you've got a year to get it together!"

Doris had been a visitor to my backyard wildflower garden about 6 years ago and the garden she remembers barely exists. I suppose that there are gardens that remain to some degree the same. But most gardens change. Even the neighbor who plants the same annuals is planting in a different garden each year. Gardens age. The trees grow taller, perennials fill in, new plants are added, plants die, trees have to be removed. Gardens change. Gardeners age, too, and sometimes what we were able to do at an earlier time isn't always manageable.

Life happens to a garden

When Doris stopped by for her tour the back garden was an alive garden. There were paths through the wooded lot, a dry stream bed and native wildflowers were blooming. Phlox pilosa, the Practically Perfect Pink Phlox 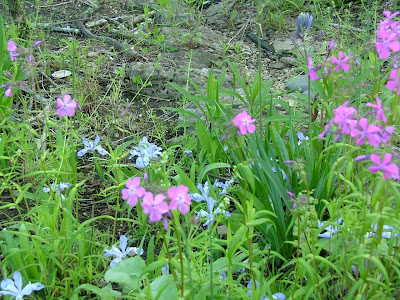 had put on her best party dress and the visitors were charmed.


Five years ago it all changed...it started with some hip pain at night and grew into a backache nightmare. Gardening changed for me. I had to give it up for quite a bit of time...and I am afraid that the beautiful wildflower garden that Doris visited went to seed!

Years of digging and moving rocks about the garden had taken it's toll on my body. Word came down from the experts..."take care of your body or never garden again." When I ignored their advice, I would have a serious amount of pain as a consequence. So, I curtailed the heaviest gardening chores. But not without being forced to stop. It was a difficult time for me and the gardens.

The front gardens got most of my energy and attention. Well, because they were in the front and you can't completely ignore the front gardens! That's what I said to my husband when he saw me gardening! It was so very hard to not garden....impossible was more like it!

That was also the summer we decided to build the front porch. Which meant that the garden had to be moved....it was right where the porch would be built. So, I very slowly and carefully moved the garden; including the 37 daylilies I bought from Gilbert Wild and Sons! I moved them and most of the other perennials to plastic swimming pools until the bed was ready and it was cool enough to transplant them.

One of the professionals helping me with my back, suggested I dig the plants while lying on my stomach!

You can all laugh at that one! I actually tried it. It worked for a few little plants, but seriously, I garden on clay and limestone and in the middle of the summer, nothing's coming out of the ground without putting your back into it. A dear friend dug the grasses and other deeply rooted perennials. She was wonderful!

May I distract you

The front garden along the driveway is where I built a new bed. It's doing fine. 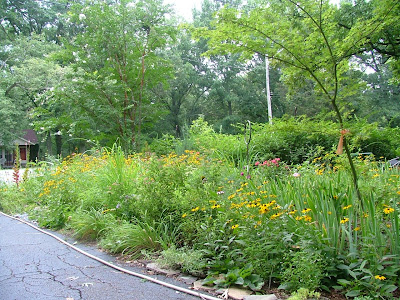 You can enlarge this photo to see the Rudbeckia and other cutie pie plants. 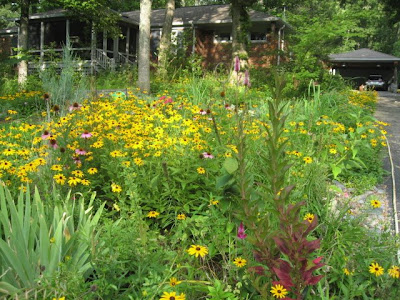 From the street, looking up the hill. I love Rudbeckia and its bright bloom...at this time of year it's almost the only bloom we have. 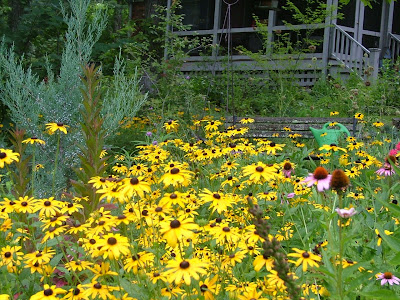 It feels alive with butterflies, bees and color. But, now, something else needs our attention! 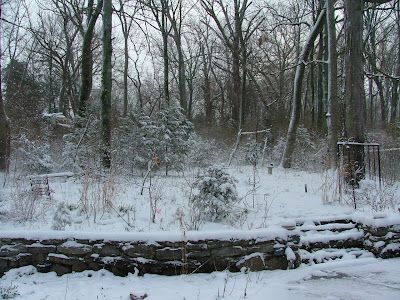 Ahh, if only we had snow all winter, no one could tell how over grown it has become.

Secondary succession began in the garden as soon as I quit working there. Red Cedars and other opportunists love a vacuum and have moved in. Without an intervention this garden will become a Red Cedar Forest. Although, they do look lovely covered with snow! But, we don't have a snow cover all winter and the garden shows its neglect from November to February. 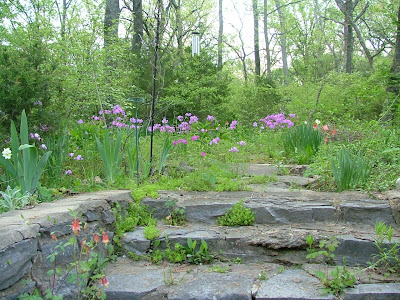 Since our house sits on a small slope you step up from the patio to the wildflower garden and wooded yard beyond. Thyme grows in the full sun on the steps, so does Columbine and sedum.
It's quite colorful in the spring.... 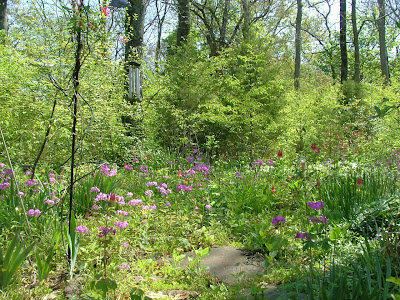 Here we are at the top of the steps looking towards the wooded back yard. Someplace in there is a stone path; with wildflower beds to the left. Phlox pilosa and other wildflowers are happily romping about!

We have climbed through the wildflower covered path and have turned to the left. You can see the dry creek bed (metal fish at the bottom of the photo below). 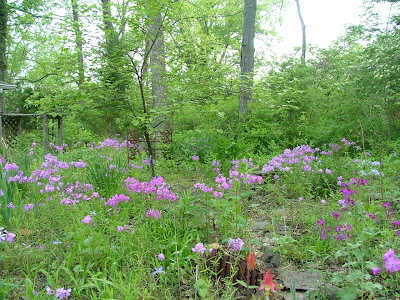 The dry creek runs through the middle of the garden and off to the side, where it carries water away during the rainy winter months. It works well moving the rainwater runoff from the slopeing yard. There are wildflower beds on both sides of the creek.

Phlox divaricata, columbine and crested iris are woodland flowers they were not bothered by this gardener's absence! They have multiplied! Why wouldn't they...it's becoming a real woodland, not an artificial one! Ahh, succession at it's best!

When I stand out there now and look around, I think...well unprintable things! 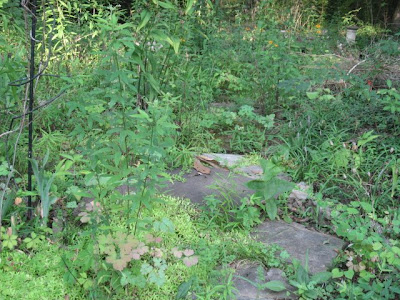 Once again, we are standing at the top of the steps looking into the garden down the path. Believe me, that is a path! 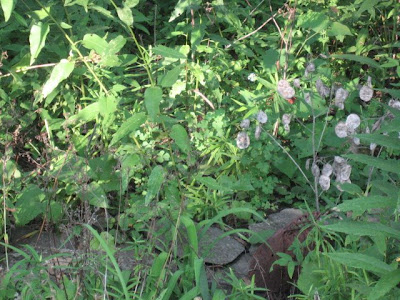 A close up of the fish and the dry stream with its weeds and wildflowers. If I didn't know that not everything in this closeup was a weed...I could get very discouraged! The seed head is Lunaria/Money Plant; there's also P pilosa, penstemon and wild aster.

What it has and what it lost

A quick assessment tells me that a dogwood and witch hazel died in the drought last year and shrubby dogwood, spiderwort, and PPPP have had their way in the garden! The neglected brick and stone paths have plenty of weeds....that can be remedied. Wildflowers like Iris cistata, Phlox divaricata, P paniculata, P pilosa, Aquilegia canadenses, trillium and daffodils and other bulbs are plentiful. That's good! The shrub layer and other small trees are fine....Cercis Canadensis has made a strong showing and sowing! The Viburnum rufidulum is still beautiful. But Vinca major and V minor, along with Liriope and bush honeysuckle have gotten too big a strangle hold. That will take some help!

It's not a historical garden and nothing needs to be static. Now, that I am able to work in the garden like I need to, I'll weed the beds and clear the paths this fall. Once it's clear, I can decide how to proceed. One thing's for sure, there will be plenty of Phlox pilosa to transplant elsewhere! Let me know if you want any?

One more thing! Doris, this garden might be tour ready in 2010...but certainly, not any earlier. I have to take care of my back!

"A gardener learns more in the mistakes than in the successes." - Barbara Borland
Posted by Gail at 10:44 PM