An Upside Down Life

The black and yellow garden spider spun her web among the Iris and there she waits, hanging upside down all day, for unsuspecting prey. 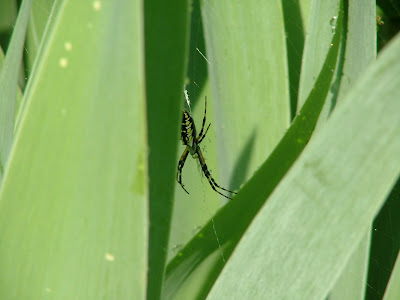 She's a gorgeous spider and her web is very unique. Argiope aurantia commonly known as Black and Yellow Garden Spider is an orb weaver. It was her unique web and a trick of oscillating the web back and forth that caught my attention...

Researchers believe that the vibration may either serve to scare the predators away or ensnare prey who might be trying to work free of the sticky web. Viewed up close the web is quite a work of art.

"Web construction is complicated.(source) To start the web, Argiope firmly grasps a substrate like a grass stem or window frame. She lifts her abdomen and emits several strands of silk from her spinnerets that merge into one thread. The free end of the thread drifts until it touches something far away, like a stem or a flower stalk. She then creates bridge lines, and other scaffolding to help her build the framework of the web. She builds a hub with threads radiating from it like a spokes of a wheel. She switches to sticky silk for the threads spiraling around this hub that will actually catch her prey. It may take a few hours to complete the web, then she eats the temporary scaffolding and the center hub. Black and yellow spiders often add stabilimenta, or heavy zig-zagging portions, in their webs." There is no certainty among experts about what purpose stabilimenta serves...it could be a place to hide from predators or a warning to birds that there is a web in its flight pattern.

While some Argiope spiders leave webs in place for night hunting, it is not unusual for it to be built and then eaten at the end of the day! Even if she catches no big prey like moths, grasshoppers, June Beetles, aphids or even cicadas, the tiniest insects that were stuck to the sticky web will be her dinner. 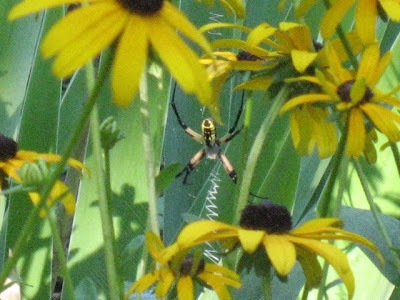 Not only is she harmless to humans, she and others of her kind do a lot of good...In addition to the prey listed earlier, they also eat mosquitoes! That's good news to me! 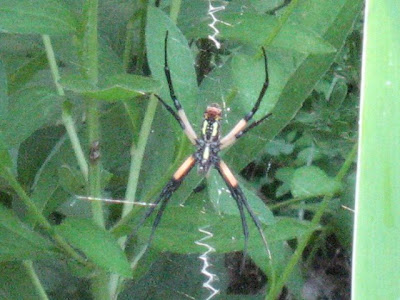 This spider is female, no doubt about it! The male is smaller and a pale imitation of her beautiful coloration. When males reach maturity they leave the egg sack and wander off seeking a mate. Once he finds a female, he begins his courtship. He will build a web near by or attach himself to her web; then he plucks the strands to get her attention. She may attack and if he's a smart spider, he's prepared for the worst and escapes down his safety line. If not he's toast.

What a life. Once he successfully mates he will die....sometimes becoming her dinner. Once she lays her eggs, up to 1400 of them in the egg sacks and secures them to the web she will watch over them as long as she can and then she will die. The baby spiders hatch in late summer and they remain in a dormant state during the winter. They hatch in the spring and begin maturing and moving about in the garden and the cycle continues.

You've got pretty parlor, now catch some mosquitoes for me, it's not flies that are a problem! 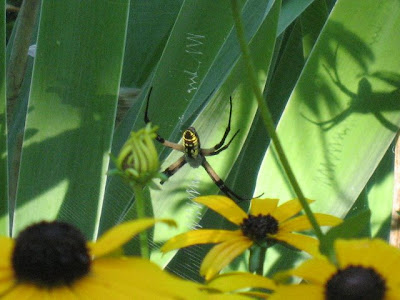 If you want to see some great photos of spider webs, I suggest you head over to Faire Garden to see Frances' post Web Walk.