The woodpecker tree fell with a resounding plop onto the very spot my last client had been parked 15 minutes before. We were very lucky and so was she. Imagining the damage to her car and the dueling insurance companies was an interesting few minutes. It would have been all our responsibility...really mine; I left the tall tree carcass for the Downy and Red Bellied Woodpeckers.

Those woodpeckers are a delight to see....and even though they lost their happy tree house...there are plenty of other trees on our wooded acre. 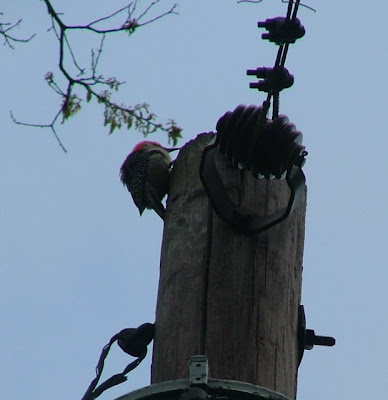 They seem to like the telephone and power polls, too. This photo was taken in early spring...I haven't been able to get a good shot of them again.

When it fell, it conveniently broke into 3 large sections...so I was able to roll them just a bit to get them out of the way. In the meantime, we've left them for the arborist to haul away later this summer.

I've just recently noticed they were sporting some fabulous looking members of the tree mushroom family. 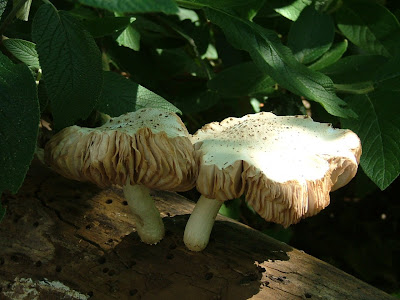 These are my favorites. Aren't they wonderful looking. I haven't the faintest idea what to call them but they are the cutest couple! But they are good looking mushrooms. (click to enlarge)

I've search engined mushrooms and fungi and visited a few sites to attempt to identify these beautiful gifts of nature. But, I couldn't find them.

One site was quite interesting... You can visit it here Fungi

Here's a few excerpts that I found informative and maybe a bit dry (!) from that site. I love the language of botanists and biologists...although I often need a translator! I've highlighted the better sections!

The organisms of the fungal lineage include mushrooms, rusts, smuts, puffballs, truffles, morels, molds, and yeasts, as well as many less well-known organisms (Alexopoulos et al., 1996). More than 70,000 species of fungi have been described; however, some estimates of total numbers suggest that 1.5 million species may exist (Hawksworth, 1991; Hawksworth et al., 1995).
As the sister group of animals and part of the eukaryotic crown group that radiated about a billion years ago, the fungi constitute an independent group equal in rank to that of plants and animals. They share with animals the ability to export hydrolytic enzymes that break down biopolymers, which can be absorbed for nutrition. Rather than requiring a stomach to accomplish digestion, fungi live in their own food supply and simply grow into new food as the local environment becomes nutrient depleted.

Most biologists have seen dense filamentous fungal colonies growing on rich nutrient agar plates, but in nature the filaments can be much longer and the colonies less dense. When one of the filaments contacts a food supply, the entire colony mobilizes and reallocates resources to exploit the new food. Should all food become depleted, sporulation is triggered. Although the fungal filaments and spores are microscopic, the colony can be very large with individuals of some species rivaling the mass of the largest animals or plants.

Ok, we are getting to sex!

Prior to mating in sexual reproduction, individual fungi communicate with other individuals chemically via pheromones. In every phylum at least one pheromone has been characterized, and they range from sesquiterpines and derivatives of the carotenoid pathway in chytridiomycetes and zygomycetes to oligopeptides in ascomycetes and basidiomycetes.

More about woodpeckers in this paragraph:

Within their varied natural habitats fungi usually are the primary decomposer organisms present. Many species are free-living saprobes (users of carbon fixed by other organisms) in woody substrates, soils, leaf litter, dead animals, and animal exudates. The large cavities eaten out of living trees by wood-decaying fungi provide nest holes for a variety of animals, and extinction of the ivory billed woodpecker was due in large part to loss, through human activity, of nesting trees in bottom land hardwoods. (Carroll and Wicklow, 1992; Cooke and Whipps, 1993; Dix and Webster, 1995).

We haven't even touched the mycorrhizal fungi relationship, without which most plants (including our lawns) would not survive. I will save that exciting lesson for another day;-)


It's obvious to me that I have fallen into the internet Rabbit Hole...looking for one thing and before you know it, you have been everywhere, gathering way too much information and spending far too much time. You all know what I mean. It is a delightful trip most of the time with none of the weirdness that Alice experienced. But for now, there is just too much information on mushrooms with so many good sites.

and...As much as I wanted to be able to identify them. There was no way....there isn't enough time already in my day! Until google and other search engines perfect an image search it will continue to be exhaustive. So, I had to call in a favor. My son is a grad student in Providence, RI and he has a colleague who is a mycologist, a big mushroom and fungi expert. A welcome Six Degrees of Separation (no Kevin Bacon) from an expert! I've forwarded the photos of my favorites and these others. 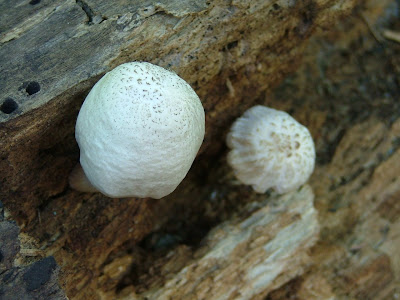 Which I also think are cool looking. 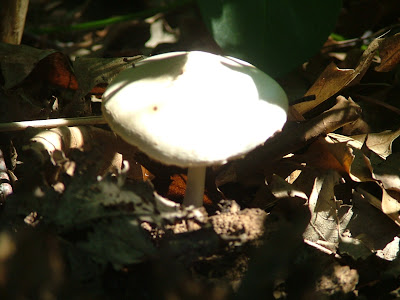 It would be nice to have an id for them, but really I don't care! I love knowing that they are important in the ecological scheme of life...that given enough time they could turn those trunk pieces into some nice rich humus, that fungi have an important mycorrhizal role in our world and that some of them are darn good tasting!

This isn't a recipe so much as a set of guidelines that you can follow to stuff portabellas with any pre-cooked filling.
If you prefer your hummus cold, you may cook the portabellas without the filling and fill them with it when they are done. Simply follow the cooking directions above, placing them in the baking dish with the cavity side down. (Fat Free Vegan)

The Rose: Just what species or, shall we say, genus are you, my dear?
Alice: Well, I guess you would call me... genus, humanus... Alice.
Daisy: Ever see an alice with a blossom like that?
Orchid: Come to think of it, did you ever see an alice?
Daisy: Yes, and did you notice her petals? Such a peculiar color.
Orchid: And no fragrance.
Daisy: And just look at those stems.
The Rose: Rather scrawny, I'd say.
Bud: I think she's pretty.
The Rose: Quiet, bud.
Posted by Gail at 6:29 AM