I've been on Bug Patrol 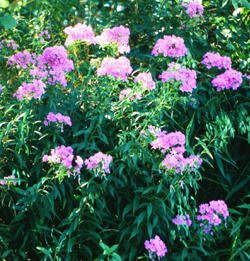 I'm getting really good at catching the despicable bug that is again decimating my Phlox...the once beautiful P paniculata. I can creep up on him and clap him away with both hands with a thunderous applause that he has gone to wherever bad bugs go.

All my attempts at good garden sanitation practices, monitoring and insecticidal soap has come to naught! The phlox bug (Lopedea davisi) is back... not in the huge numbers of last year, but enough to do damage to the leaves and make me want to cut it all down and toss it in the garbage. Sigh. I don't think I can grow summer phlox here anymore and I am doubly sick.

Phlox paniculata has been the backbone of this garden for years. They were a gift from the previous owner and they were spectacular...even having reverted to species pink by the time I got them. You know I love that magenta color. Plus they really didn't mind the shade!

They were important to the garden. They had gone to seed and were peppered about the garden... dozens of plants. A smorgasbord for both good and evil bugs! But they flowered well into the summer and dead-heading helped keep them flowering. They would grow in semi-shade and brought a bright shot of color to an other wise green expanse. I miss them.

Then there is P paniculata 'David' 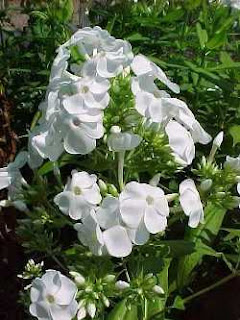 the perfect southern summer gentlemen...no mildew and a beautiful white flower. I planted him a few years ago and he was coming along nicely...then last year, after a long vacation, I noticed he was just too sick looking. I cut him back and then dug him out...thinking that refreshing the soil and planting a new bit of him would be better...But this spring I couldn't bring myself to plant any P paniculata....not until I was certain the bug was under control.

I may have to move to bigger guns...real pesticides...I hate them...I love the creatures that live here and don't want any accidents. It's a big dilemma!

This garden needs phlox...It's beautiful and stately almost reaching 5 foot tall, with a sweet fragrance that lures swallowtail, Painted Lady, fritillary, skipper and sulphur butterflies during the day and Hummingbird, Sphinx and and Hawkmoths at night. Now that's faunal association!

Did, I already say I am sick about this? I surely am....If I can't have phlox what should I plant?

"A gardener learns more in the mistakes than in the successes."...Barbara Borland


Both photos are from the Missouri Botanical Kemper Center...thank you.