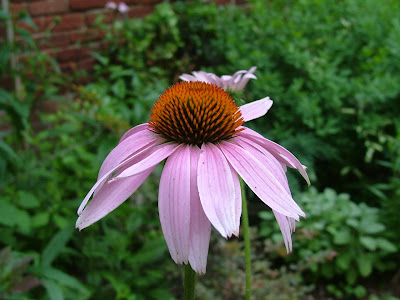 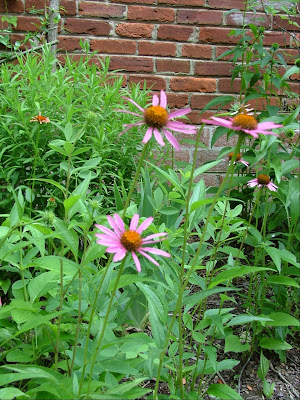 Echinacea Tennesseensis and Echinacea purpurea grow in the Clay and Limestone gardens. Both are beautiful coneflowers that draw butterflies, bees, caterpillars and birds to the garden. While they look very similar there are subtle differences. 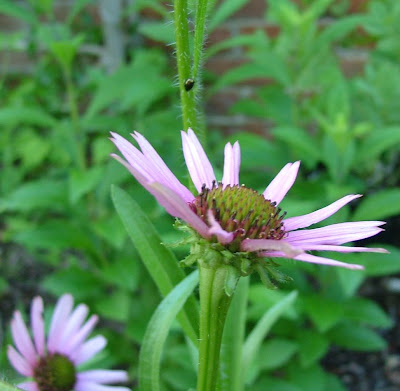 upturned with their sweet faces following the sun like sunflowers do. If you look closely you can see that 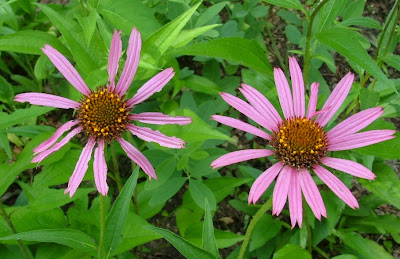 the color is richer than most other coneflowers. Don't you love the golden pollen? It's more pronounced on the Tennessee Coneflower. 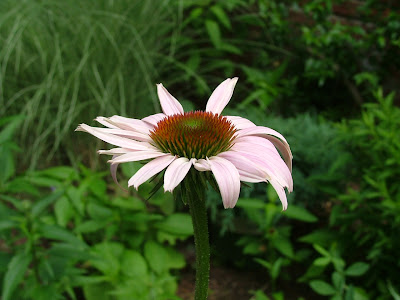 E purpurea has the classic recurved petals... It is also a paler shade of purple. The leaves are ovate and opposite....while they are drought tolerant they really prefer moist, well drained alkaline soil.

Tennessee Coneflower is found naturally growing in five populations within a 14 mile radius in Middle Tennessee. It was the second plant ever listed as endangered by the U.S. Fish and Wildlife Service (June 1979). It was first discovered in 1906 and the plant was thought to be extinct for half a century, until it was rediscovered in 1968 in Rutherford County near Nashville. It was probably the destruction of this site to build a trailer park that helped get this flower listed on the endangered species list*.

Because cedar glades were historically looked upon as worthless they have been bulldozed for roads and parking lots...The State of Tennessee is eagerly looking for property owners to add their cedar glades to the protected area list.

There are glade like areas all over Middle Tennessee...most don't qualify as cedar glades, but they do have glade like characteristics and some of the indigenous wildflowers. We have several near us and my yard has glade like pockets with some glade wildflowers...Unfortunately, Tennessee Coneflower only grows here because I planted it! But he seems to be happy.

This is one amazing plant

It is uniquely able to survive and thrive in the fantastically harsh environment of a cedar glade. If you've been here before you might remember that cedar glades are open and gravelly areas that are DRY in the summers and WET in the winters. Temperature extremes are a way of life for plants who live there. Imagine the heat of a concrete parking lot on a 98 degree summer day and you can imagine a cedar glade! The temperatures are probably closer to 110 degrees or more.

Tennessee Coneflower has a tap root rather than the fibrous roots of other Echinacea... it sends this tap root down into cracks in the exposed limestone to find soil and moisture. It does a good job because it thrives in the glade. Talk about drought tolerant!

Like other Echinacea, once established, Tennessee coneflower is drought tolerant, prefers full sun and well drained alkaline soil. Please don't fertilize this guy, that will only cause weaker stems...and think twice about moving it around...remember the tap root.

He grows 2 to 3 feet tall. Flowers are deep pink with pinkish green centered cones and the classic upturned petals. Aren't the triplets lovely? 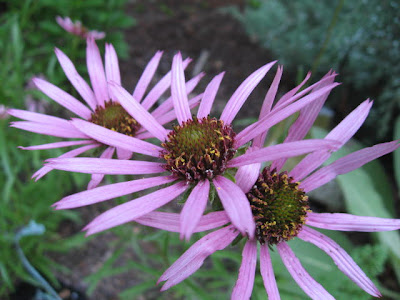 The leaves are medium to dark green and narrowly lance-shaped. Tennessee coneflower adapts well to cultivation, just don't pamper it! It has reseeded in the garden and I am pretty sure it has crossed with E purpurea to create some sweet offspring. It is nearly impossible to keep Echinacea from cross pollinating...blame it on the bees! 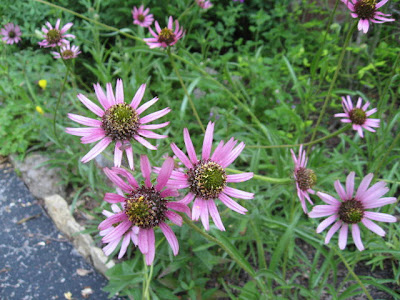 Tennessee Coneflower is planted in the nearly native cedar glade garden with plants that can survive harsher conditions. The soil is not the best, and no fertilizer has been added. It's wet in winter and dry in the summer... like the cedar glade. It would be wonderful to be able to keep E tennesseensis, pure! But we'll have to wait to see what happens...they do co-mingle, you can't forget those busy bees.

Do try these lovely plants...they are becoming available at most nurseries and on the internet. Remember they aren't to be babied; just plant them in full sun and watch them follow the sun as it moves in the sky!

*It is against Federal law to remove this plant or its seeds from parks or nature centers. Only growers licensed by the United States Fish and Wildlife Service may sell these plants in interstate commerce.
Posted by Gail at 6:11 AM