Romping in the Yard 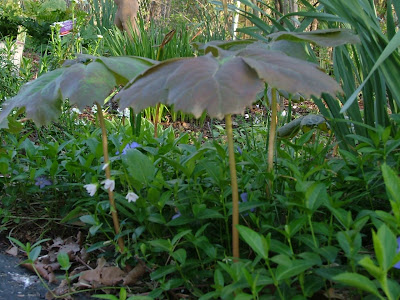 The May-apple (Podophyllum peltatum) is up and romping about the yard...They were growing wild in the small wooded area in the way back backyard and I moved them to several other spots around the yard. I remember the first time I saw them, I was walking on a trail at Percy Warner Park, here in Nashville, and there they were a very large colony under a canopy of tall oaks. They have never failed to charm me and after all these years I still delight in turning a corner on a trail and seeing them drifting down a hillside. They are fabulous wildflowers, although they can be thug like and over power weaker plants, I can't imagine not having them in a garden. Right now they are growing with the notorious Vinca m. Now, Vinca is a super thug in my yard and I knew that the Mayapple could hold their own in that confrontation. You can also spot them in a large bed in the front yard. 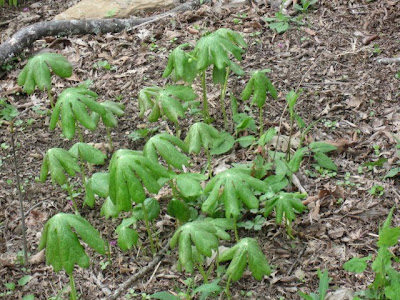 I have noticed that they are trying to get a toehold into the wildflower bed so I will have to remove them to a safer place...there are some gentle spirited plants that can't take the bullying that May-apple is capable of dishing out. 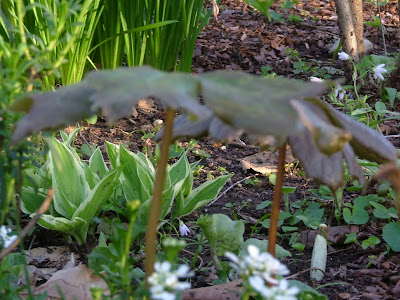 So they will be relocated to a the front bed with their friends, it's a better neighborhood...and they like company and prefer to hang out in large drifts. I'll be especially careful to wear gloves because the rhizome is the most poisonous part. Only the fruit is non-poisonous...turtles and raccoons are known to eat them.

I found this at the 2BeintheWild website: "Although too poisonous to use in home remedies this plant has many medical uses. Native Americans used the root as a strong laxative, to treat worms and for numerous other things."** Now it is used in modern medicine for treating cancer. It contains high concentrations of the compounds podophyllotoxin and alpha and beta peltatin all having anti-cancer properties.

Mayapple is a herbaceous perennial plant, that can grow to 18 inches in height. They spread by underground rhizomes and will create a large colony if happy.

Leaves: The leaf arrangement is opposite, one or two leaves. But only plants with two leaves flower. Each shiny, yellow green, umbrella like leaf is deeply lobed.

Flowers: White. Blooms first appear in mid spring and continue into late spring. Thought most plants have 6 petals some have up to nine. See the bloom, it's hiding. 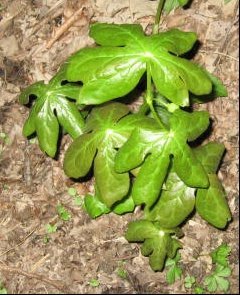 and here is an even better look at the flower bud. 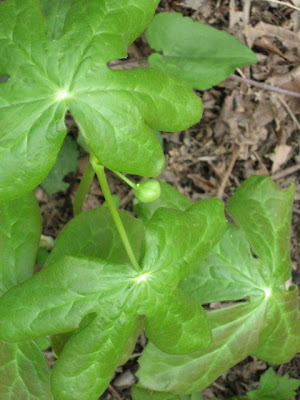 Fruit: A berry which looks much like a lime.

Habitat: Rich woods where there is an open canopy. In my yard, they are planted in heavy clay and top dressed with leaf mold. They don't spread as quickly but that is fine.

Range: Throughout the eastern US, southeast US and Canada.

Mayapple is an easy-to-grow perennial, plant it where he and his friends can romp about and not bully other plantings. Plant in rich, slightly moist woods, preferably in the fall. Although, I have moved them in the very early spring when the plants are just peaking out of the soil. See the third photo to see the emerging plant, it is the small white finger like growth near the bottom of the photograph.

Give this guy and his buddies a try, but give them plenty of space and they will make a home in your garden.
Gail