Did you know that April has 30 days not 31? I had to recite "30 days has September, April, June and November" to realize that I didn't have an extra day to get my front yard post up in time to participate in the Garden Bloggers' Design Workshop . Here it is, hopefully in time! Thank you Nan for this opportunity.


Last fall I began a major reworking of the entire front yard ... most of the front yard is garden with grass paths and a small lawn area in fuller sun. We are still working on getting cohesion in the beds and editing plant material. I have an editing problem. Well, truth be told, I have a serious plant acquiring problem which causes the editing problem. I love plants and probably need to stay away from the nurseries unless it's on the list. A list edited by the garden coach.

There are four garden beds:

Backstory, Excuses and a Happy Ending:

The Foundation Wildflower Garden has had the most dramatic transition, so far. It has gone from a big mess to a fairly decent wildflower garden. I say fairly decent because it has plants that sport beautiful spring color and interesting foliage the rest of the year. There is a section that still needs work....probably editing!

Shall I be brave and show you the before photo? Okay, here goes....

But first, please prepare for shock....and don't judge me too harshly, I let the area 'go' when we began plans in the early winter and we didn't start the work until August. But, it was terrible looking even before I stopped working on it. Now look! 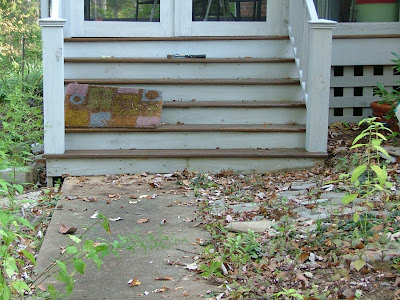 You may be saying, that was bad but not so bad; Believe me that wasn't the worst shot, here it is.... 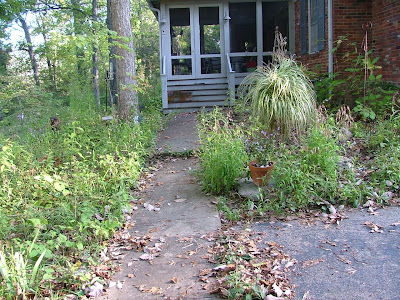 Goodness, I feel all exposed and just a bit embarrassed! Like a poorly dressed Cinderella who knows she is a Princess inside; but none the less hates that you are seeing her covered in ash....

Time for an excuse:

When we added the porch we had plans to change the sidewalk and landscaping, but we made a financial decision to do it later. Don't ever do that...later is always more costly and a big hassle! But that is another post or maybe a rant.

We worked with a garden coach and a landscaper to bring this unruly garden into order. Sarah drew up some great plans, which included editing out plants and acquiring ones that made sense. Leigh brought the hardscape into reality. 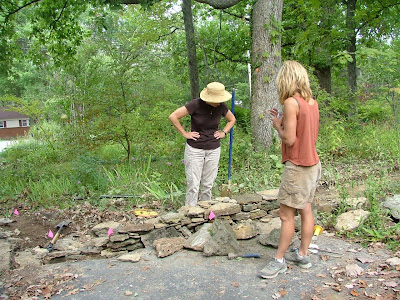 Sarah and Leigh consult about the height of the wall. Please note, I dug up most of the rocks used for both walls when I originally dug the beds. They were being used as stepping stones or small walls, not missed at all with this new design.

The crew that Leigh brought over to do the rock walls and lay the flagstone were wonderful. Leigh had them build two curved walls. The house is very linear and the curves have softened it tremendously. 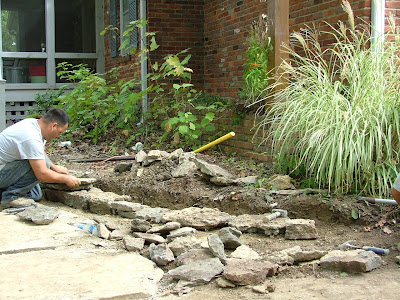 This is the second wall being built. 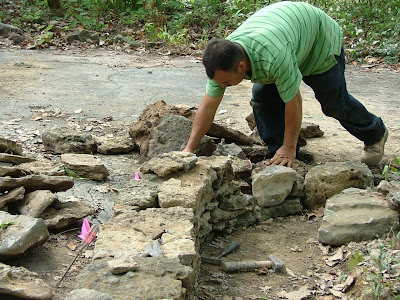 I love the rocks, I can remember where I dug some of them, especially the huge ones! Seriously, I do.

This was a fun project to be a part of... I asked them to include two boulders that were unearthed when we had some drain work done...If you look closely they look like a Triceratops! 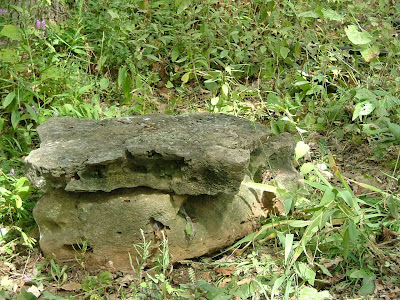 After three days of hard work ...this is what I had. I cleaned up the construction mess, added more soil and began to implement Sarah's garden plan. She gave me a list of plants to get. So off to the nursery I went, list in hand! 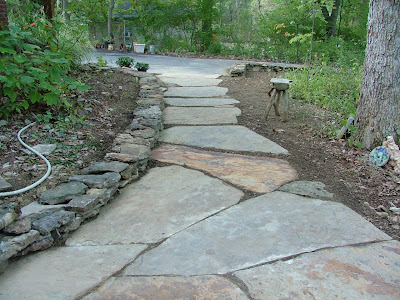 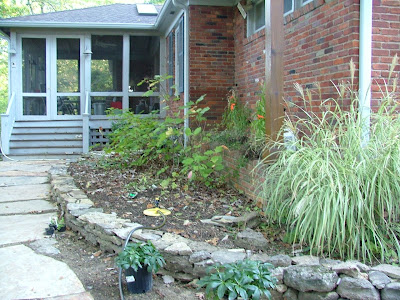 and a few weeks later, I had planted Tiarella, Phlox divaricata, Heuchera, bulbs, Wild Geranium and Christmas Fern on the upper bed and dozens of Heucheras, two varieties of Blue Star, epimediums from another part of the garden and bulbs into the lower bed. The lower bed needed major weeding and editing of unwanted plant material. Cinderella was getting ready for the ball. 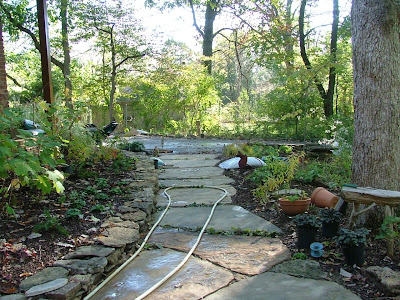 Later in the fall, the Blue Star shines in fall color and is echoed by the Witch Hazel in the mid background. Can you see Rusty to the left aglow? 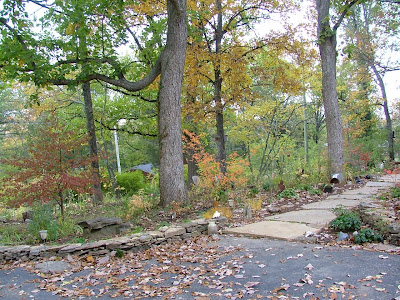 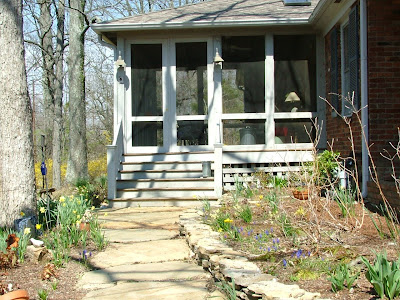 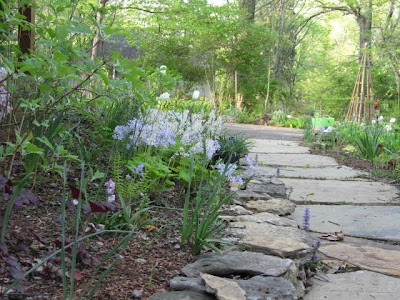 Late April....the perennials are emerging in the sunny curve. 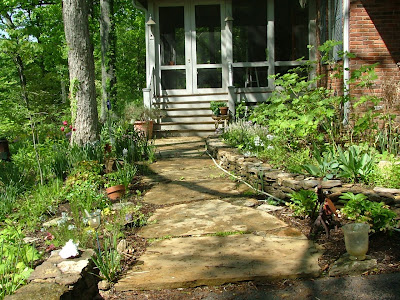 and here you can see more perennials including Lemon Daylily, Columbine and grasses. 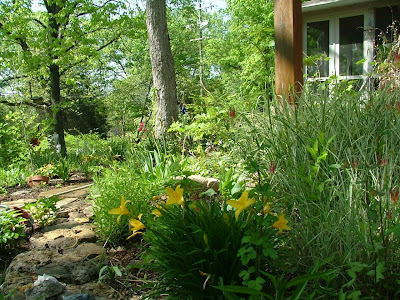 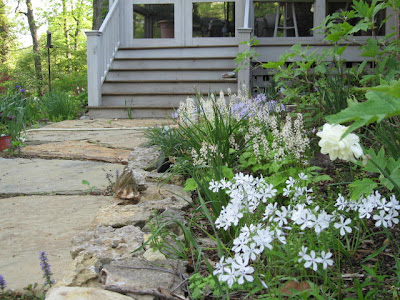 More wildflowers in front of the Front Porch...you have seen the Golden Ragwort in another post. It is a groundcover and looks especially lovely with the burgundy Japanese Maples. 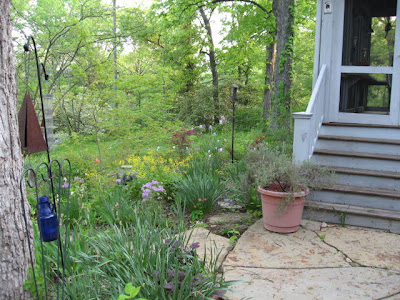 I will always be guilty of stuffing too much plant material in any garden. I have, an affinity for garden clown pants...it's not perfect but then I am aiming for Great.