Night blooming Common Evening Primrose is our rough and tumble Wednesday star. This tall biennial is  found growing in fields, prairies, glades, thickets, waste ground, disturbed sites, and in other sunny medium to dry sites. While native to almost all the states it's found more often in the central and eastern US. 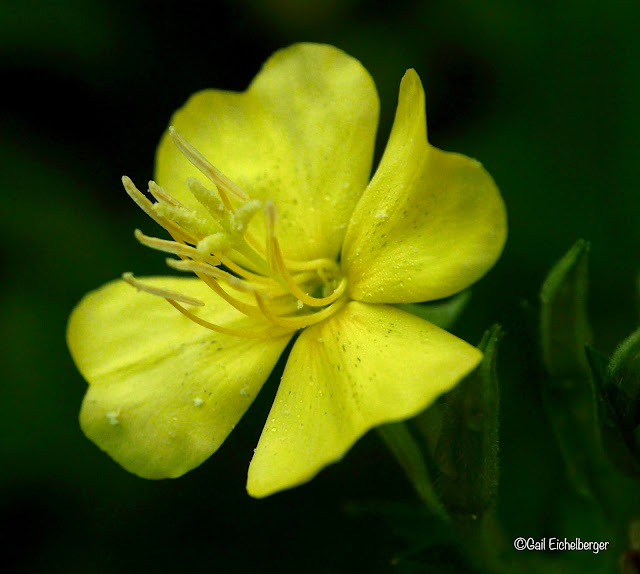 While researching the plant I noticed that it showed up on several state weed sites! That's always disconcerting to a wildflower/native plant enthusiast, but, not all wildflowers are appreciated or valued by everyone. Some might be put off by it's height or it's unremarkable foliage, neither bother me. I find the yellow flowers that are still blooming when I walk the garden early in the morning to be quite charming.  I like catching their sweet lemony scent and watching the occasional pollinator visitor that's out that early.


At the top of the over six foot tall, hairy, olive green leafy stalk are the lemon-scented, bright-yellow, four-petaled flowers. Flowering begins in June on second year plants; the stalks continue growing throughout the season, so there are flowers until fall. 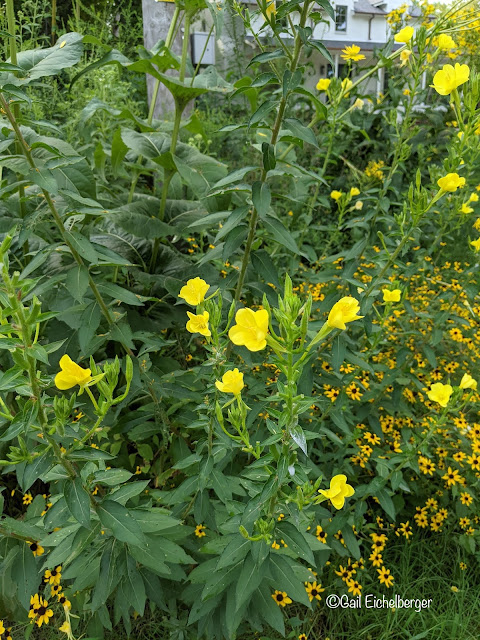 In my garden it's happily growing with Rudbeckia triloba, Silphium perfoliatum, Verbesena virginica and Asclepias syriaca. Use native grasses, Verbesinas, and/or Coreopsis to disguise the lower bare stalks.


Oenothera biennis takes 2 years to complete its life cycle, with basal leaves becoming established the first year, and flowering occurring the second. It's not difficult to have flowers every year, just save the seeds and keep planting them. You shouldn't have trouble collecting seed since each seed capsule makes at least a 100 tiny seeds.  Don't get too alarmed about all the seeds...they're an important goldfinch food. 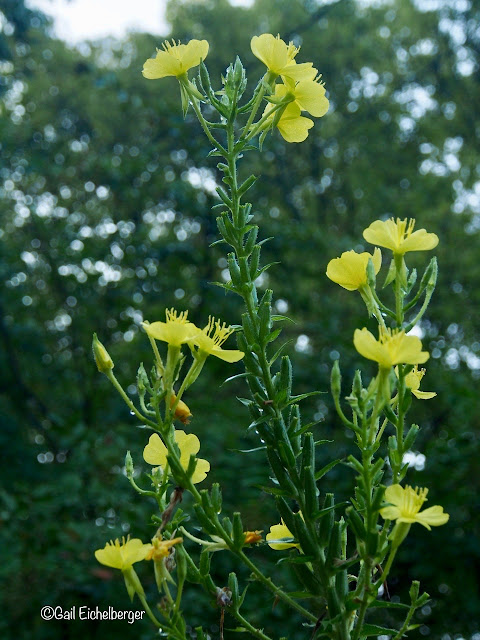 This plant can get tall, plant it where it won't block other pretties, but, where you can still enjoy the flower show and catch its lovely lemony scent.

Common evening primrose is open for the night shift. That's when the pollinating creatures of the night are out and about. Sphinx moths and other moths pollinate the flowers. I saw bats flying around the flowers and deduced they were there for the moths and other night visitors. 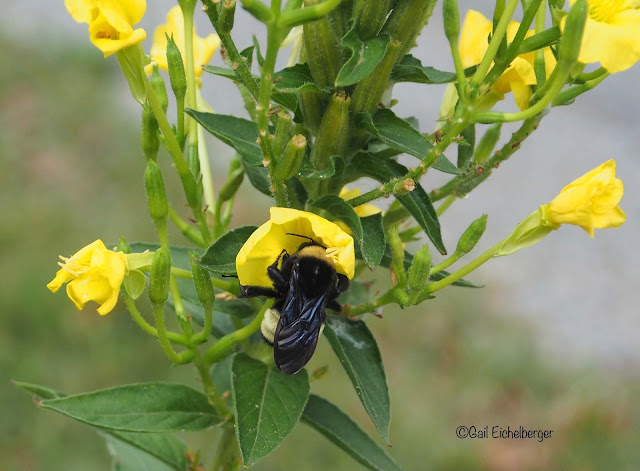 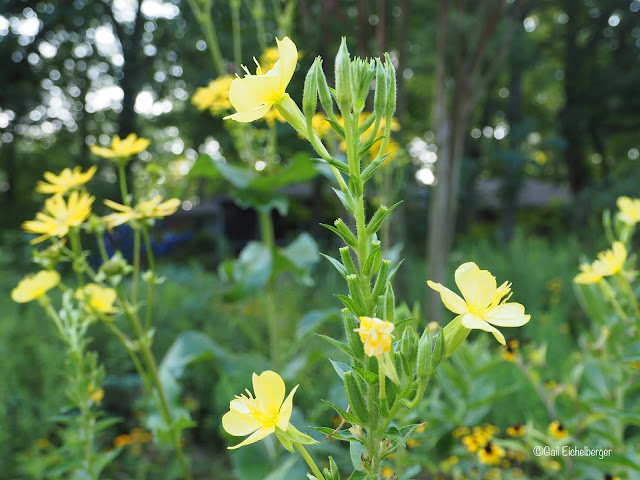 I appreciate scrappy native plants like Oenothera biennis that are often the first to show up in disturbed areas. They're automatically members of the rough and tumble wildflower club at Clay and Limestone. I wish that all the disturbed areas around the country could be repopulated with natives, but, too often the non native invasives arrive first. Count yourself lucky if the good guys show up!

PS If you're new to Clay and Limestone, rough and tumble wildflowers are simple wildflowers that bloom their hearts out and require the easiest of care. Many have never been hybridized, which means they haven't had their best characteristic bred out of them. Rough and tumble wildflowers are doing the job nature intended them to do, which is to make a lot of food (nectar and/or pollen) and bloom exactly when the critters need it-just in time for provisioning a nest for the winter or for migrating birds. Once bloom is past and the seeds ripen, they become feeding stations for over wintering birds which seek out those seeds.

Gail Eichelberger is a gardener and therapist in Middle Tennessee. She loves wildflowers and native plants and thoroughly enjoys writing about the ones she grows at Clay and Limestone. She reminds all that the words and images are the property of the author and cannot be used without written permission.