Such a pretty spring flower and I understand it smells like rotting flesh! 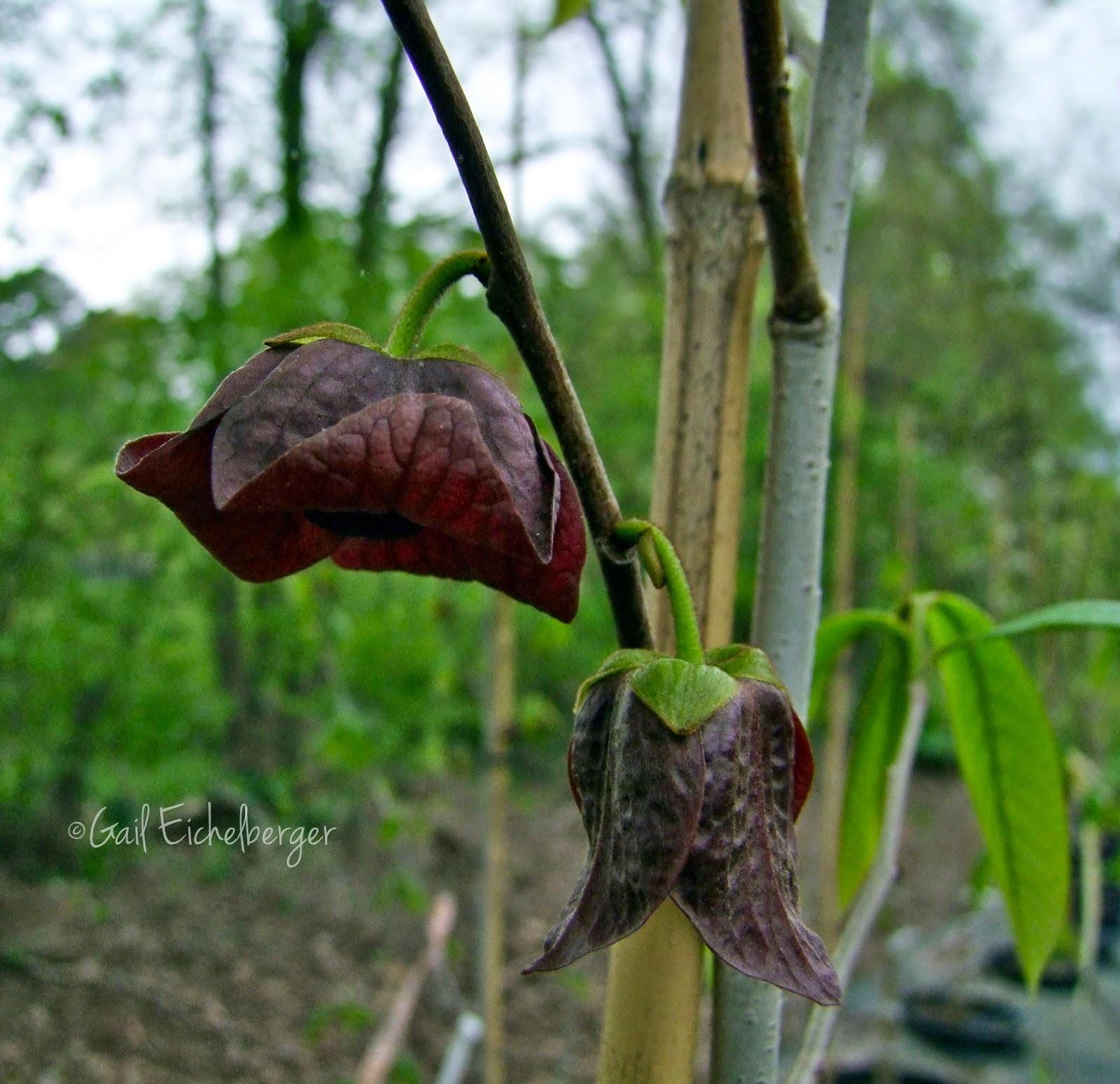 Everything I knew about Paw-paws I learned from Captain Kangaroo...sort of
Back in TV land in the mid-fifties the Captain invited us to sing along and mime picking up Paw-paws and putting them in a basket! I hadn't the faintest idea he was talking about a fruit, actually a giant berry, but, I remember loving the game.

That was the last I heard about Asimina triloba or Common Paw paws until I became a native plant gardener and began learning to identify native wildflowers and trees. After a small patch was pointed out to me on a trail at Edwin Warner park I began to get interested in learning more about them. Paw paws are not only a charming looking understory tree, but, has good wildlife value for critters. It's a favorite host plant (larvae feed on the leaves and flowers) of the zebra swallowtail butterfly in the southeastern states and the only host plant for more northern locations. The fruit of the Paw paw is also eaten by forest mammals. But, it wasn't until my friend Terri Barnes of GroWild shared a few with me that I had any idea how wonderful they tasted~ a sweet, custard flavor that's quite hard to describe.

A good looking tree and a good food source for critters~including humans! I had to have them in my garden. So, I planted a small seedling last spring that I found for sale at a school fund raiser and then this past week, I planted a patch! Okay, patch might be too strong a description, but, I planted more Paw paws.  Paw paws don't self-pollinate, but they do spread vegetatively and create quite a nice patch, but, no matter how big the patch gets, they still need other Paw paws, that are not part of its clonal group for pollination.  Hopefully, my little patch will produce smelly flowers that will attract flies and beetles and Paw paw fruit will be in my future. (for more about flies go to: We can't all be pretty pollinators)
My Paw paw patch
I planted 6 small divisions that were dug last spring from a friend's large Paw paw patch. When Mark  messaged me that they were going to thin the patch and I was welcome to any and all divisions, I was there in a flash with gloves on and shovel in hand! I took about six pieces home and nurtured them until I thought it was safe for them to be planted out. The perfect spot was near the first seedling and they're planted about 8 feet from it in hopes that any flowers produced will be pollinated by flies and other pollinators attracted to their flowers' rotting flesh fragrance!

Here's my rule breaking story: One, they're divisions and Paw paw divisions usually fail when transplanted; two, I planted in the fall and recommended planting is spring; three, this garden is any thing but a Paw paw's preferred growing site~i.e. well-drained, deep, fertile bottom-land.

I think I've given them a pretty good start and have faith they will survive what ever Mother Nature and this garden can throw at them!
More about Paw-paws
The Common Paw paw is the northernmost New World representative of the Annonaceae tropical family. It's called a "tropical fruit for the temperate area". It's a lovely understory tree with big leaves and large greenish-blackish fruit. Inside is a delightful tasting fruit that's pale to dark yellow with a network of dark seeds. The taste has been described as a banana-mango-pineapple~I don't know, I just thought it was good.

Asimina triloba is native to the eastern US from the great lakes all the way to the Gulf coast and west into Tennessee where I live and garden. It's found naturally growing in the hills around my neighborhood where it gets the excellent drainage it requires. Grown in full sun it will develop a narrowly pyramidal shape with dense, drooping foliage down to the ground level. Although, it's reported to fruit better in full sun it needs shade and protection from winds its first two years. Remember to plant two trees so they can cross pollinate and please don't dig them from the wild. If you're fortunate and have generous friends you might try a Paw paw experiment like mine. What have you got to lose!
Speaking of generous friends! I want to take this time to thank all the regular Wildflower Wednesday participants for a great year and to thank all of my readers and commenters for making blogging so much fun. You all rock!
Happy Thanksgiving.
xoxogail