Little Sweet Betsy is abloom and dancing with the Spring ephemerals.  Middle Tennesseans put on your hiking gear and head to one of our many natural areas. Davidson county residents, we are lucky folks to have the Metro Parks nearby (Warner Parks, Shelby Bottoms, Beaman Natural Are are but a few). Williamson County residents, of course you should pop over to visit Metro Parks, but,  you have a treasure in Owl's Hill, call them to sign up for wildflower hikes on Tuesdays and while you're there you can get acquainted with their resident owls.
Closer to home, Sweet Betsy (Trillium cuneatum) can be seen in remnant woodlands all over my neighborhood. Sixty or so years ago roads were bulldozed  through farmland and woodlands west of Nashville to build one of the city's first planned communities for the growing post war population. Our little bit of the neighborhood with its shallow soil and exposed limestone bedrock had never been farmed, but, had been logged, what you see now is secondary growth with a few untouched areas in the hills and ridges surrounding us. The indigenous wildflowers~ False Soloman's Seal, Spring Beauties, Rue Anemone, Trout-lily, False Garlic, Blue-eyed Grass, Wild Sweet William and Sweet Betsy, never disappeared and each spring delight residents with their arrival.
The first spring in our new home I found blooming Toadshade (another common name) in the wayback backyard and transplanted it to my new woodland garden. That was 25 years ago, but, I remember carefully digging around it to get all the rhizome and roots and gently placing it in the garden. They survived and thrived despite my gardening ignorance.
Trillium cuneatum typically flowers from early March to mid April. It can be found in rich, mostly upland woods, but, it is especially happy growing on Middle Tennessee's Ordovician limestone soils (neutral to basic soil). The two I transplanted have multiplied to many and as long as it isn't crowded by aggressive perennials it's happy. Trillium Plants can live for 25 years or longer and usually do not flower until they are several years old. It's found growing across Alabama,  Georgia, Illinois, Kentucky, Maryland, Mississippi, North Carolina, Pennsylvania, South Carolina, Tennessee and Virginia. I read that it can even be found in Michigan~makes me wonder how it "escaped" to plant itself there! 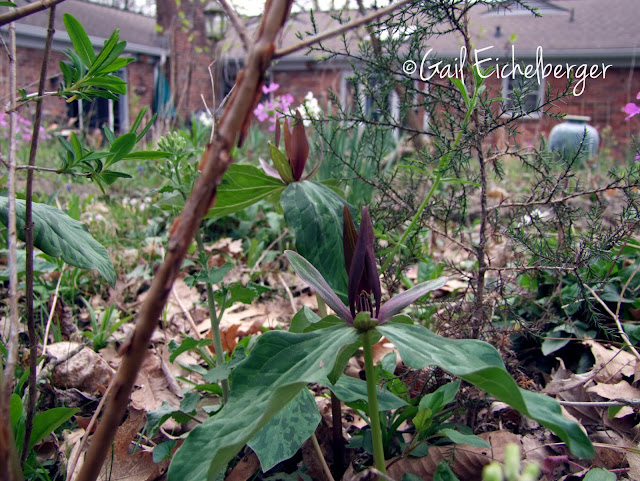 Despite being known as Little Sweet Betsy it's the largest of the eastern sessile trilliums, sometimes topping out at 15 inches tall.  In case you wondered, sessile means stalkless and what appears as a stem is actually an extension of the horizontal rhizome. The leaves, petals and sepals of all trilliums come in groups of three. 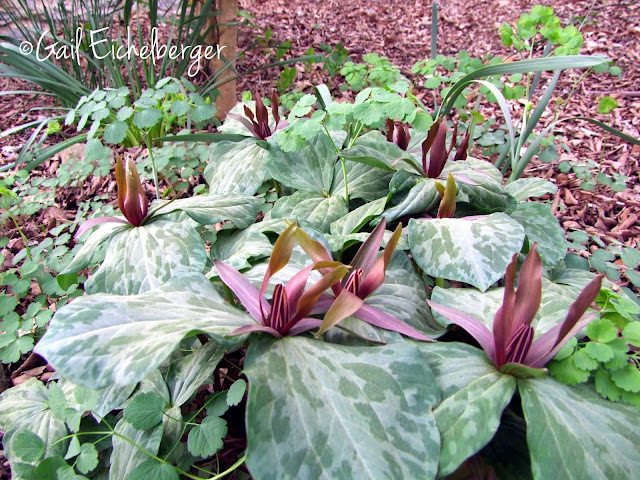 The trillium is a simple, graceful perennial that is one of the most familiar and loved of the spring woodland wildflowers.
But, you don't have to take my word for it~Just check out  Trails and Trilliums this weekend in Monteagle. You can attend talks,  hike and buy wildflowers. They may even be selling trilliums!

Gail Eichelberger is a gardener and therapist in Middle Tennessee. She loves wildflowers and native plants and thoroughly enjoys writing about the ones she grows at Clay and Limestone. She reminds all that the words and images are the property of the author and cannot be used without written permission.
Posted by Gail at 5:00 AM