Doctor, Doctor, Give Me The News! 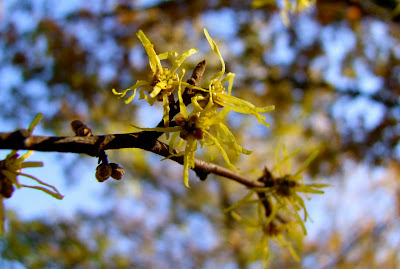 Witch hazel (Hamamelis virginiana)
I've had two visits with doctors recently. Last month, the tree doctor made a house call to see a white oak that suddenly dropped 2/3rds of its leaves over night~~It seemed strange to drop so many leaves. My neighbor has lost several oak trees to some kind of fungal disease and we wanted to make sure this oak was healthy. 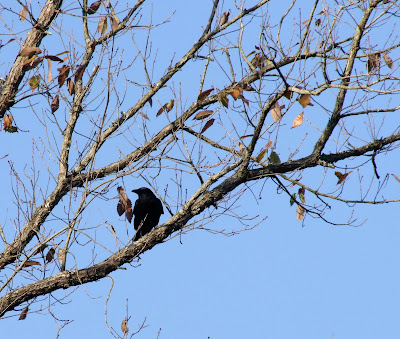 Not the possibly sick oak!
Knock on wood that this tree is fine! Not only would taking a tall oak down mean a sudden change in the garden...it would be very expensive to do. 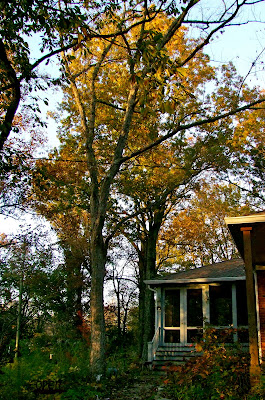 It's situated right next to the front porch steps off the flagstone path. You can see its denuded branches in comparison to the shag bark hickory and oaks that are lit by the setting sun. It's one thing to make a decision to create a sunny garden and remove trees. It's altogether different when the change is forced. 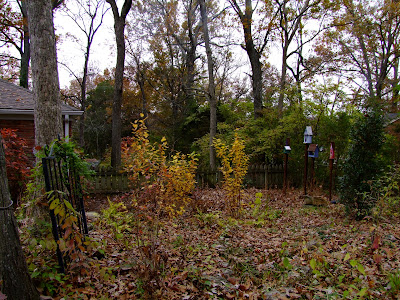 Hammelis virginiana in the GOBN
We have a few leaves at C&L
I met the Doctor at the bottom of the driveway, where he greeted me with a hearty "Hello" and an exuberantly delivered, " Where is your suburban lawn?" As you can see Doctor...there is practically none! 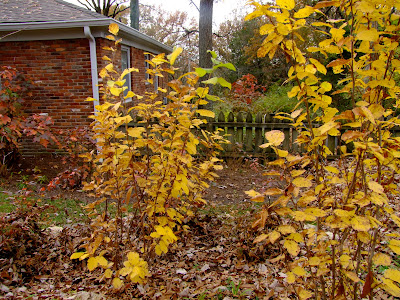 Witch Hazels last week
He reassured me that what we were doing~~ Not planting a monoculture of grasses and letting most of the fallen leaves mulch the trees and beds ~~ was the very best garden practice for overall tree health. He shared that he is usually called to a home to see very sick trees in the middle of over fertilized lawns. He and Aaron, the arborist he works with, spend a good deal of their time educating homeowners about maintaining tree health.

We walked around the yard and he gave me the thumbs up on all the trees. Noting that there were a few limbs that needed to be thinned in trees in the wayback backyard. It was late enough in the season that it was hard to see how denuded the tree looked. Most of the trees were similarly denuded by the time he was able to visit. He didn't find any evidence of oozing wounds that might indicate some fungal diseases. He asked if we had done any recent digging around the base of the tree. That's when I told him we removed a concrete walkway and added the flagstones~~ It's possible that the root disturbance and the 2007 drought had combined to stress the tree. 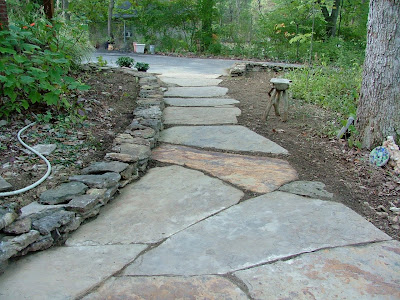 He suggested a conservative plan~~ watch the oak to see what the spring would bring.

Yesterday, I saw my orthopedic surgeon about my very sore hand. Several months ago I was diagnosed with de Quervain's Tenosynovitis and was treated with an injection of cortisone. It worked beautifully, but, eventually the pain came back. I have decided to have surgery. It seems to make sense based upon how quickly the cortisone wore off! So on December 3, I will arrive at the surgery center hungry, caffeine deprived, cranky from 5 days off ibuprofin, where I will wait for several hours for a ten minute procedure to release the roof of the tunnel that surrounds the tendons. Believe me it is going to be worth it! 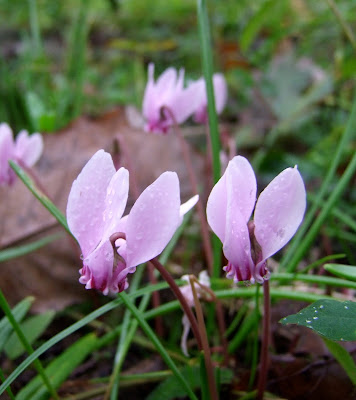 Thanks for listening~~You are the best!
Gail

What the caterpillar calls the end, the rest of the world calls a butterfly.
Lao Tzu
Posted by Gail at 4:00 AM