It Was The Name That Got Me First~~

White By The Gate
I had to have it! 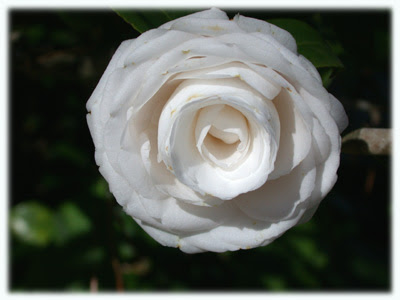 White By The Gate (Camellia japonica)*
Never in my wildest dreams did I imagine  that an acid loving camellia would find its way into my heart.  Or,  into the nearly neutral, poorly draining, often dry soil of Clay and Limestone!  I circled back around to it three or four times before it went into the cart.  I knew exactly where she would be planted!
The pure white double flowers and the deep green evergreen leaves  shown  on the tag were lovely.  She would be perfect in the  newly improved soil of the lower Garden of Benign Neglect.  Right by the garden gate.   A  white flowering evergreen would look beautiful there. It was going to  be very  important to make sure White was planted high (trunk base above the soil line) in moist, well draining soil that absolutely needed to be  kept  acidic.  It could be done.
She was covered in small buds when I brought her home.  The ground wasn't ready so White stayed in a sheltered place, safe from the deep frosts we've had these last few weeks.    I wanted to see those white blooms.
But, something happened to make me wonder what was going on with White~~ 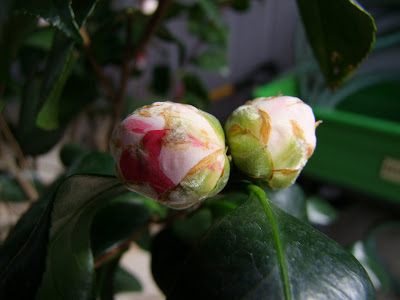 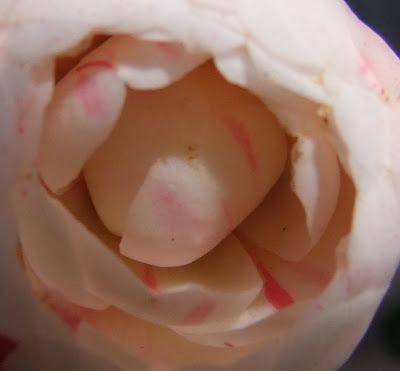 She opened up her first flower to reveal 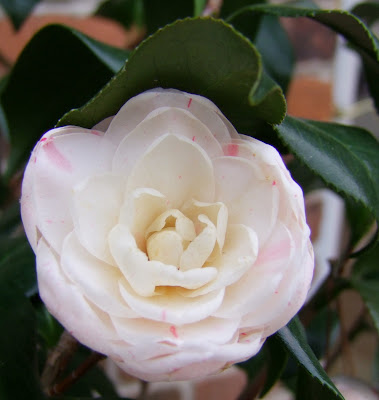 A beautiful double white flower with light pink striping~~Very lovely don't you think?  But, not the pure white that she was supposed to be!

Being a complete novice about camellias, my first thought was that she was mislabeled. Boy,  was I disappointed!  I really wanted  White By The Gate!
But, further reasearch revealed that White was simply doing what many camellias do.  She was sporting.
Some camellias have an odd  habit of producing different coloured flowers on different parts of the same plant. 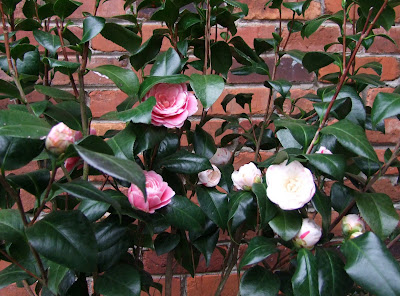 Trust me this is the same plant!
This  ‘sporting’  is not that unusual.  "Sporting is the way in which a plant reveals part of its genetic makeup or parentage."  Apparently, it's not unusual for White by The Gate to have a white flower with pink stripes.
But,  a pink flower with whitish stripes 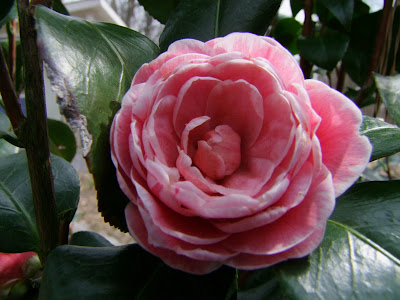 and a white flower with pinkish stripes 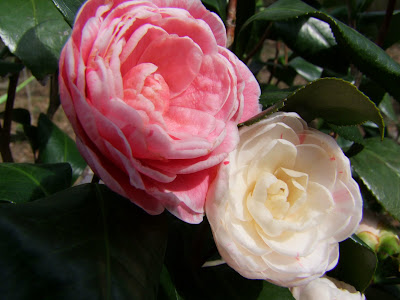 on the same plant was quite  a surprise to me!
White and Pink By The Gate is quite lovely~~ 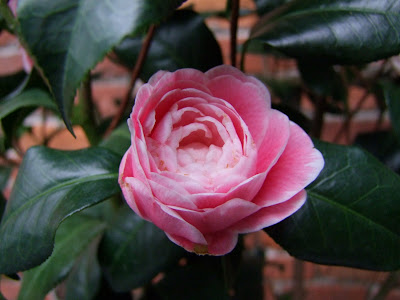 But, I don't think it's really White By The Gate!  Or,  is it!  What do you think?  Is White Sporting or was she mislabeled?
Gail
*From Mercer Arboretum
Posted by Gail at 5:30 AM