The Last Days of Bush... 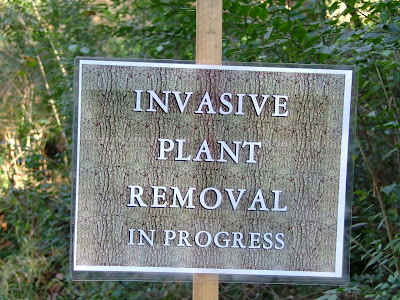 Of course, they smell delicious. You know, they will forever remind me of long car rides, windows down and the breeze heavy with their sweet fragrance. Sigh.

But, let's not get too sentimental! They are flawed! Seriously flawed! 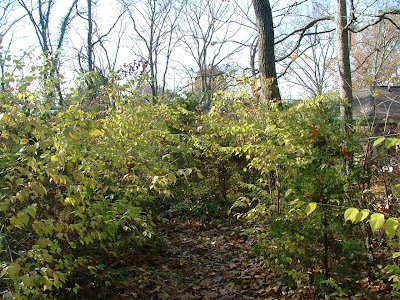 The Tennessee Exotic Pest Council considers Bush Honeysuckle to be a severe threat (Rank 1) to native vegetation. If you visit our local parks you can see it everywhere. Asian bush honeysuckles (Amur, Tartarian and Morrow's) generally range from the central Great Plains to southern New England and south to Tennessee and North Carolina. It's a serious problem for many states!

So What is the big deal?

~~It rapidly moves in an area and takes over, forming a dense shrub layer that crowds and shades out native species.

~~It alters the environment: Scientists suspect that bush honeysuckle produces an allelopathic chemical that suppresses the growth of surrounding vegetation.

~~It out competes native vegetation: Their leaves appear early in the spring and remain into late fall, giving bush honeysuckle a competitive advantage over native plants. It's even thought that their flowers are sweeter, thus attracting more pollinators then the native shrubs and flowers. Consequently, natives aren't able to set enough fruit.

~~Rapid reproduction and high dispersal ability: Look at the seeds one bush can produce! The fruit of bush honeysuckle are high in carbohydrates and birds love it. Over 20 different species of birds feed on it...spreading the seeds everywhere. 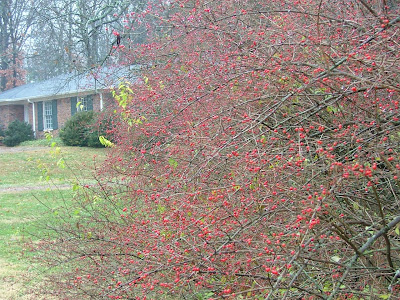 Beautiful in fruiting red~~too bad it is a bad, bad, plant!
Here's the rub....their fruits are not the high fat-nutrient rich food that migratory birds need to make their long flights....that diet comes from the fruit of native plants. Plants that disappear when bush honeysuckle moves in and takes over a plant community.

More bad news for the birds... The very successful invasive bush honeysuckle creates a denser shade than native shrubs, thus reducing both plant diversity and nest sites for many forest interior species...resulting in a decline in the bird populations. It's a domino effect upon diversity!

Here's my excuse story! A decade ago we decided to let the backyard grow up into a woodland. We began by only mowing where we wanted trails. We planted Maples, a Fringe Tree (Chionanthus virgincus), Redbuds/Cercis canadensis, Cornus florida/dogwood, Ilex opaca, Sweetgum (Liquidamber styraciflua), and several witch hazels. In time, native dogwoods planted themselves along with pioneer Red Cedars/Juniperus virginiana . We didn't mind at all. Then the honeysuckles arrived in greater numbers then I could remove (please read the story). Within a few years they exponentially increased by the hundreds.

Within the last several years, most of the native wildflowers that had been growing in the wayback disappeared...plants like False Garlic, Mayapple, Blue Eyed Grass, Trout Lily and Spring Beauties...all shaded out by the dense cover of the bush honeysuckle.

Last year came a very late freeze and the worst drought in my gardening experience. We lost the Cornus floridas, the witch hazels, the maples and the native ilex. The Red Cedars, rough leaved dogwoods and the Cercis all survived. Unfortunately, so did the bush honeysuckle. In fact, it thrived; quickly filling in the void left by the dying plants.

It is so past time for a change!

This week Aaron (the motorcycle riding, mountain climbing, skydiving arborist) and his crew will be here to begin the cleanup of the wayback backyard. The wayback is the wooded and wild area behind the Garden of Benign Neglect. The GOBN is the primary residence of Practically Perfect Pink Phlox 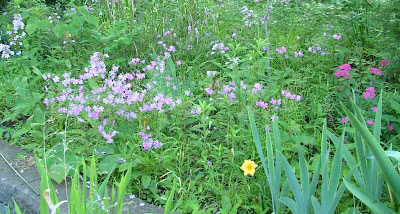 and you know I do keep the honeysuckle out of there!

I can't wait for the crew to arrive. I plan to be out there while they work...there are small trees ...Viburnum rufidulum/Rusty blackhaw back there and shrubs like Forestiera ligustrina/Glade privet...that they might not recognize. They could accidentally remove a few forsythia;-) 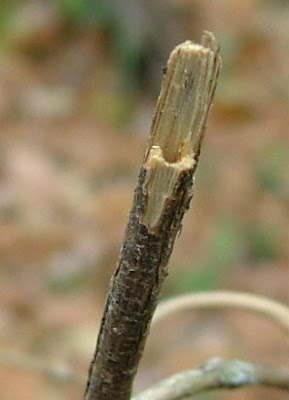 has a hollow stem.

Spring ephemerals returned as if by magic when the brush was removed in the local parks. I'm crossing my fingers that they will pop back up once the dense shrub layer is gone! Spring will be even more exciting!

So here I am today...contemplating how to keep the wayback backyard a wooded area with paths and mystery....but control the honeysuckle.

I've some ideas, but I am certainly up for more! 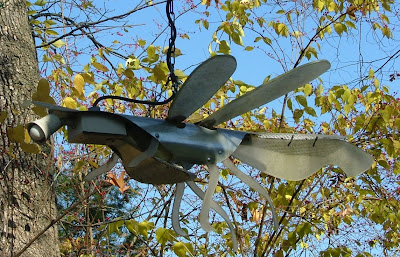 The bug light in The Garden of Benign Neglect
I am so very glad you stopped by!

A problem cannot be solved with the same thinking that originally created the problem. Albert Einstein