Wish You Were Here, Part 2 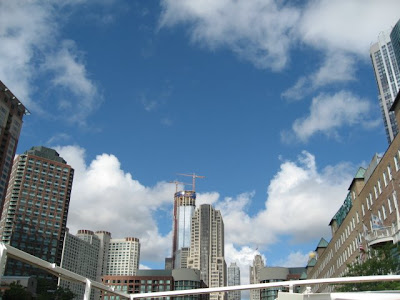 We are having a great time and find our heads in the clouds, as we run all over this wonderful and big city! Not meaning to sound too chamber of commerce in my praise of Chicago, but this city's architecture really is spectacular. All you need to do is look up and there are any number of late 19th Century and 20th century buildings.

So, we decided to treat ourselves to an Architecture River Tour... The Chicago River forms a Y with north and south sections and the tour travels up and down and under the bridges. It was both, entertaining and informative. Our tour guide was a practicing architect and a life long resident of Chicago. With every word he spoke, you knew he loved his city! He introduced himself as Irish and believe me, this guy had kissed the Blarney Stone! He ended the tour by reciting Sandburg's poem "Chicago" with its famous description of Chicago as the "Hog Butcher for the World/Tool Maker, Stacker of Wheat/Player with Railroads and the Nation's Freight Handler,/Stormy, Husky, Brawling, and City of the Big Shoulders." It was fabulous...You would have loved it!

Oh, btw, that's the Trump Tower under construction, I thought he was in NYC! 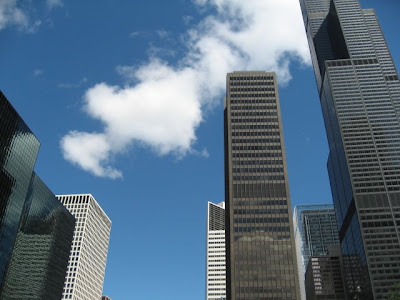 The sky was beautiful and the clouds reflecting on the many glass and steel buildings was spectacular. 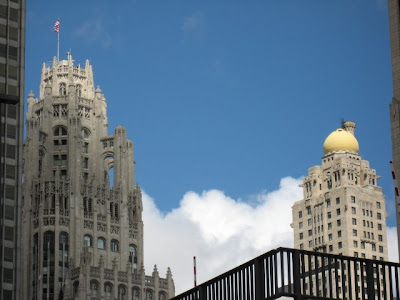 The Chicago Tribune Building, in Neo-classical style built in the late 20's. This was the controversial first place winner for a contest to design a beautiful Tribune building! Saarinen, who went on to design the Gateway Arch in St. Louis, came in second! Apparently, a Neo-classical choice ruffled more than a few feathers in the design world!

I am particularly fond of the onion dome on top of the Hotel Inter-Continental in the building across that delicious blue sky! 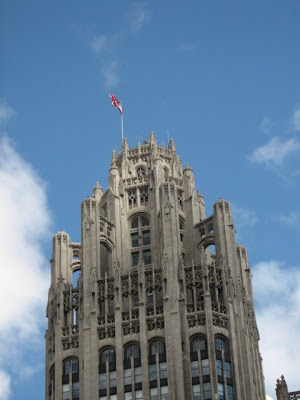 Here's a better photo of the Trib building, in all its Neo-Classicism! 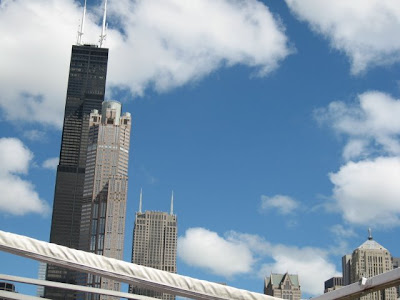 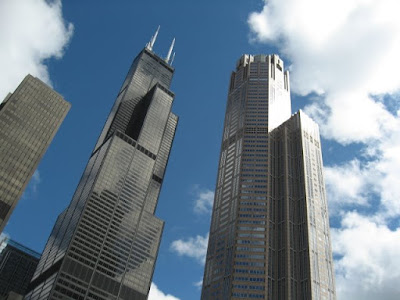 Sears Tower (1974) A very tall building! But a taller building is being built! 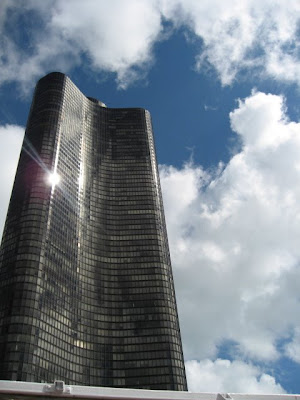 Lake Point Towers (1968) This building was designed and built by two architects who had never built anything prior to this! Now that's inspiring! 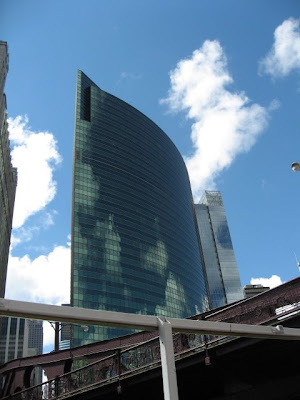 333 Wacker Drive 1983 (both photos) A beautiful building and the reflection is spectacular...Is it me or do you think~~ whales and dolphins when you see the building from this angle? 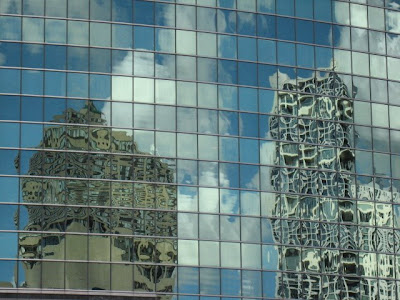 It reflects so delightfully! 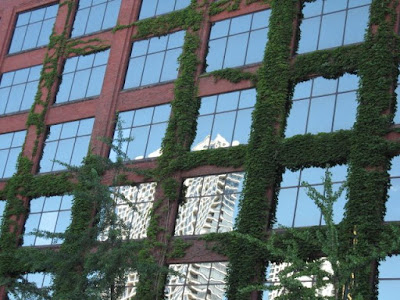 I have no idea what building this is, but it is fabulously groomed! 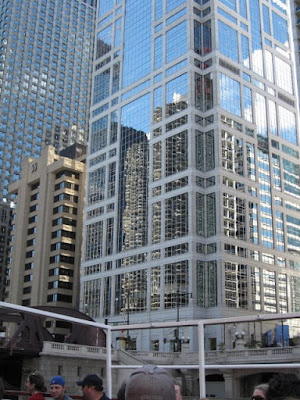 Another steal and concrete beauty...perfect partners for the cold steel blue of Lake Michigan. 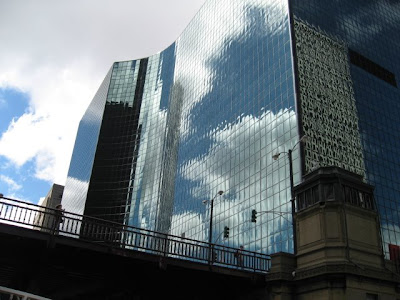 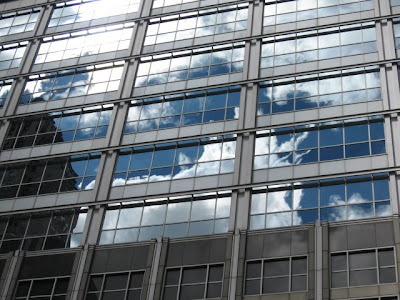 Gardenblogging friends, there were more dramatic buildings! I would gladly identify each building, the design style and the architect, but the view was so distracting...I can't remember them all and more importantly, you probably need a break!

Here's what I remember: Each of these and many other buildings represent the best architectural design movements in the US and the world.... styles represented are the Chicago School, International Style, Art Deco, Post Modern and Deconstructionist. Architects included Mies van der Rohe, Frank Lloyd Wright, Louis Sullivan and others.

I can tell you that the steel-girder skyscraper was invented in Chicago and that presently under construction is a structure that is unimaginable...the Chicago Spire... 2000 feet tall with 150 floors! The notion of a 2000 foot tall building is incredible. It's spiral shaped* 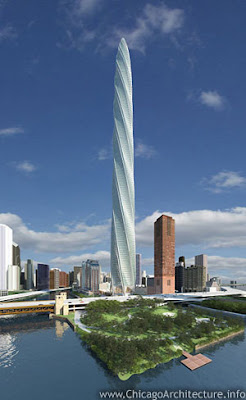 it's fluid, it nature inspired, it's revolutionary....there are other words to describe it, but gee, this is a pg blog! Follow the link, the architect is a better story teller. It's worth a look! Trust me, it is!

Wish you were here to see it all!

"We struck the home trail now, and in a few hours were in that astonishing Chicago–a city where they are always rubbing a lamp, and fetching up the genii, and contriving and achieving new impossibilities. It is hopeless for the occasional visitor to try to keep up with Chicago–she outgrows her prophecies faster than she can make them. She is always a novelty; for she is never the Chicago you saw when you passed through the last time."