When You Plant Them, They Will Come...It's a Promise! 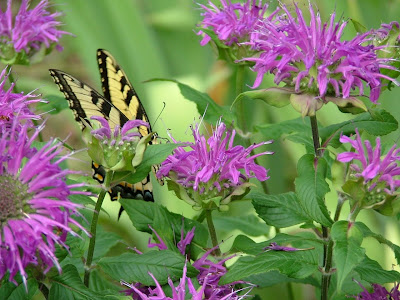 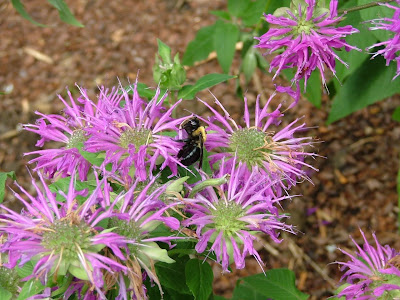 I planted Monarda didyma "Marshall's Delight' and they came...butterflies, moths and bees....no hummers, yet. 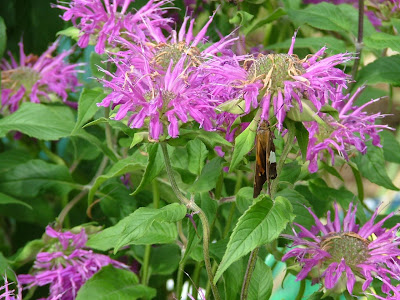 Aren't they sweet? Really, they are all over this guy... 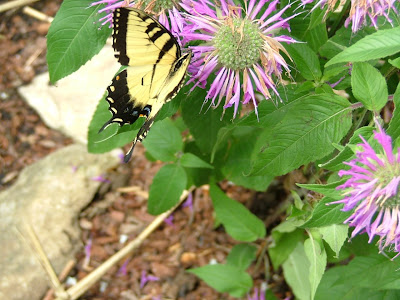 I am thrilled to see the Swallowtail butterfly. It's deep summer and soon we'll have caterpillars on the fennel, dill and parsley. How ever do you get a butterfly to stop flitting so she can have her photo taken! 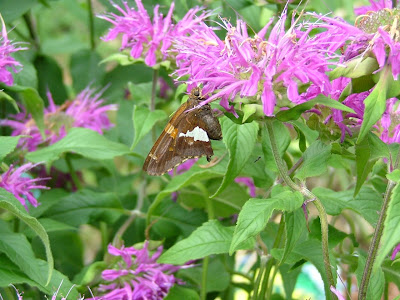 Does anyone know this guy's name? A Lepidoptera family member? Skeeter (In The Garden) identified her as a Silver-Spotted Skipper. Thanks Skeeter!

There are a number of caterpillars who feed only on Monarda didyma, perhaps there will be eggs laid on this plant. 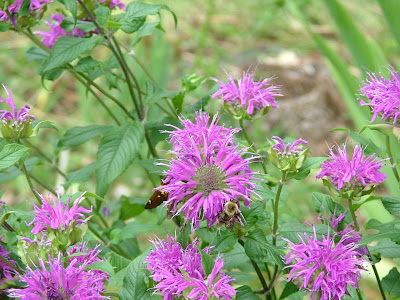 Lots of fat bees are attracted to Marshall's Delight...I haven't seen any honeybees? But I can't complain...these guys will do. 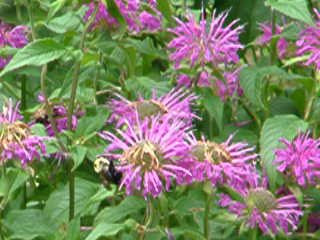 Monardas are aromatic herbs indigenous to eastern North America and are very happy in the Southeastern US. A perennial with dark green leaves and upright stems which usually grows to about 3 foot tall by 2 feet wide. If you like activity ...he's the life of the party...he will bring butterflies, bees and hummingbirds to your garden. He makes a great cut flower. Right now, I have flowers in a vase...I wouldn't be at all surprised if the stems root. The mint plants are very vigorous rooters.

OK, he's a mint and if he's happy...he may travel. For that reason monarda is often relegated to the naturalized garden...where he can grow to his heart's content. If you are diligent and divide him regularly he might not get out of control! Joy (GardenJoyForMe) has a nice post on Monarda didyma "Petit Delight", it's very similar to Marshall's Delight only...petit, so drop by to see hers.

Although, Marshall's Delight has been developed to be mildew resistant...it's best to keep him thinned out, so there is plenty of air circulating around the stems. Another recommendation to deter mildew is keeping the soil evenly moist...dry soil appears to encourage mildew. You might like this idea I found at Pahgat's : As summer was turning to autumn (in 2002), our Marshall's Delight did get mildewy. I just cut it to the ground, discarding rather than composting the leaves, & it quickly began to regrow with its wholesome appearance regained. The following year, I periodically sprayed the area with dilute milk, which is a fully organic method of keeping powdery mildew from reoccurring, & works vastly more reliably than do fungicides.

Has any one tried the milk remedy for powdery mildew? Sounds interesting and you don't have to bring out the Big Guns. Here is link that might be helpful.

This is the first season I've tried Marshall's Delight. So we'll see what the humid heat of July and August bring! So far he seems happy and he certainly lives up to his reputation as a pollinator attractor. We are hoping he won't be aggressive or thug like, but, he is a mint! He can't go too far...on one side is a ledge of limestone that is quite large. On the other, is me with my perennial shovel and clippers!

I'm hoping he's planted in the right spot. He's in pretty full sun in some great soil. I'll be giving him extra water...monarda really do like an evenly moist growing conditions and you all know that it gets just a bit dry in this garden during the summer....which means more compost and leaf mold this fall.

I don't usually coddle plants and rarely buy plants that need extra watering. It's a test! How much do I want this plant in my garden? How much extra care and attention shall he require? Extra water in the summer...a hair dryer in the winter! It's definitely a test!

So far I do like this plant. I like the bees and the butterflies that have found their way to the flowers. I want to see the hummingbirds. It is so cool to stand in the driveway and watch all that activity; to hear the buzz and hum. So I am willing to take the extra steps to make sure he's happy....I can't wait to see the hummingbirds....maybe I'll get a good photo!

“When the flower blooms, the bees come uninvited.” Ramakrisna