Some Thoughts on a Biennial

Now, I know you all know that biennials complete their growth cycle within two years. But did you know that most biennials have a rosette of leaves and a taproot? The rosette is produced the first year along with a fleshy taproot...then it goes dormant for the winter. The taproot is a storage area for starches and sugars that the plant will utilize the following spring when it has a huge burst of energy, sending up a fabulous flower stalk. The parent plant withers and dies but not before producing loads of seeds to ensure that it will be around for a long time!

The seeds of Lunaria are 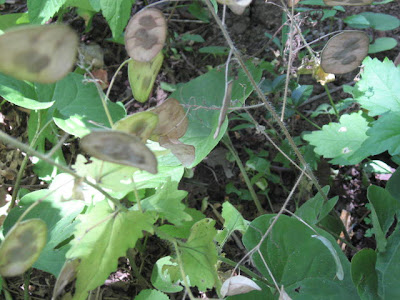 ripening now and will spread themselves about the garden.

I have never managed to collect the phacelia seeds in order to plant them in chosen spots around the garden. 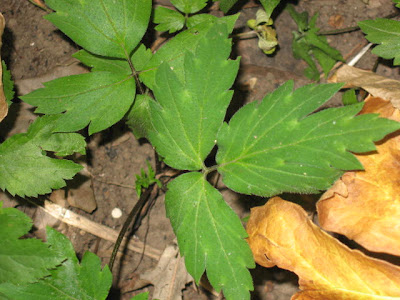 Phacelia seedling in the wildflower garden

So this spring, I ordered seeds* from Native Gardens, a Tennessee native plant nursery located in East Tennessee. Meredith collected the seeds, packaged them up and I broadcast them as soon as they arrived. Cross your fingers that they spread about and settle in. I love the flowers and posted about him earlier this year.

My hope is to have large swathes of color from both of these plants...they are easily removed if you don't like where they have seeded themselves.

The Rose Campion could never bloom and I would be happy. It's a cute little flower in rose pink that for some reason has reverted to white with a tiny hint of rose. Both nice colors. Don't get me wrong I love the flowers, but... 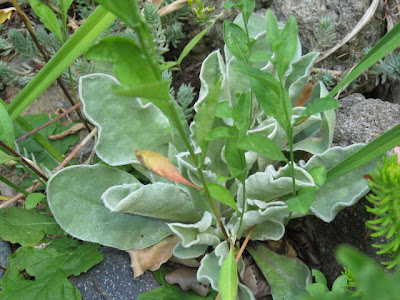 it's the silver gray foliage that I admire. You can't have enough silver gray in a garden... 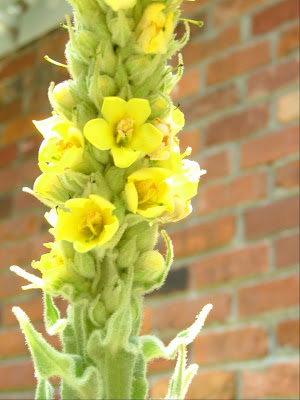 That's the problem. A serious problem according to some folks. Major flaws...

Common Woolly Mullein is considered a noxious weed in Tennessee and many other states. Here's what The Least Most Wanted site has to say!

"During the first summer after germination mullein produces a tap root and a rosette of leaves. During this vegetative stage, the rosette increases in size during the growing season until low temperatures arrest growth sometime during the autumn and winter. Beginning the next spring, second year plants bolt into maturity, flower, produce seed during the summer, and then die, completing the plant’s normal life cycle. Flowers mature from the base to the tip of the stalk. The length of the flowering period is a function of stalk height; longer stalks can continue to flower into early October. It is estimated that a single plant can produce 100,000-180,000 seeds which may remain viable for more than 100 years. The seeds are dispersed mechanically near the parent plant during the autumn and winter. Seeds at or near the surface are more likely to germinate."


Wow! That is a very successful naturalized plant! Or noxious weed!

On the other hand there are herbalists who love this big guy. The leaves, flowers and even the stems are harvestedto treat a number of respiratory ailments.

I didn't plant the mullein for its flower or its medicinal uses...it has always been the big woolly leaves that have captured my attention and interest...It has never gone to seed while in captivity at Clay and Limestone! 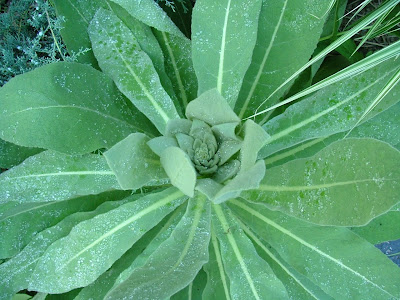 How Gail let this noxious weed be: 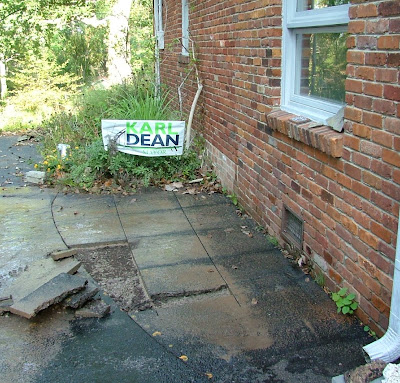 extend this bed to the side door. We decided to make the bed cedar glade plant friendly. Baptisia, Grey Owl Juniper, Tennessee Coneflower, Salvia azurea and other natives were planted, along with a non native grass and the mullein. That's Verbascum thapsis with Juniperus virginiana, 'Gray Owl'. 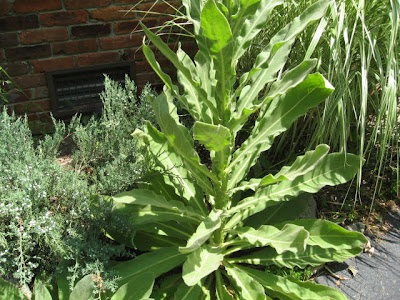 The grass to the right of the mullein was moved there to soften the entrance. I found the woolly mullein in the front yard, a present from somewhere. I thought he would be a good foil for the juniper and the miscanthus. Doesn't he look good?

But, now we have this big yellow noxious weed, poised to take over the world! Well, my world!

He is really poised to take over empty fields...he loves a sunny, bare spot better than anything else....which may explain why there were only two small plants here. He found the only bare spots in the entire yard. I transplanted them to the sunny bed.

I will remove the flowering stalk after I admire it for a few more days. It has an incredible presence. Goodness, it's already over 6 foot tall and growing! Do you suppose you can stop the biennial nature of a biennial by removing the flowering parts early in the second growing season? I cut back spent flowers on annuals to increase their longevity, would it work on a biennial? Can we neutralize him and keep him just a fluffy bunch of big woolly leaves? 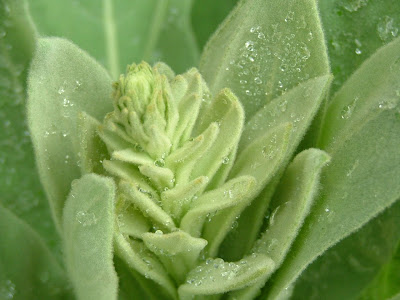 Just look at those leaves, 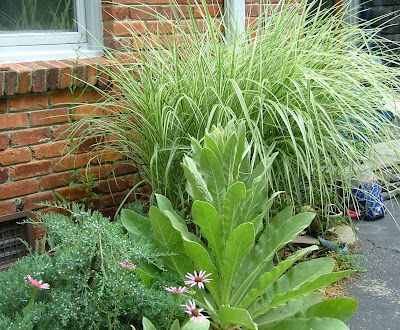 they are absolutely perfect with the Gray Owl Juniper!

Sigh, it's hard having a conscience when you garden and love an invasive alien;-)

It is not enough to understand the natural world; the point is to defend and preserve it. Edward Abbey

*I also ordered Blue Eyed Mary seeds!
Posted by Gail at 5:00 AM