Guess Who's Back In Town Today 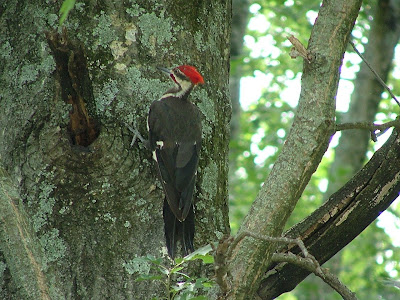 I heard loud pecking and rustling from across the street and there he was...rat-a-tating on a neighbor's tree! A Pileated Woodpecker or Dryocopus pileatus, the largest woodpecker in North America. Largest after the Ivory Billed Woodpecker.* (all photos enlarge)

The Pileated Woodpecker is the 747 of the woodpecker world. He's not quite as big as a crow, but at about 15 inches tall...he's big! You can't miss identifying this woodpecker when you see him! He's big and has a red crested head! He looks exactly as he does in the photo...black body, long tail, red crest on his head, white stripes on his neck and black and white stripes on his face. Females have a brown forehead and 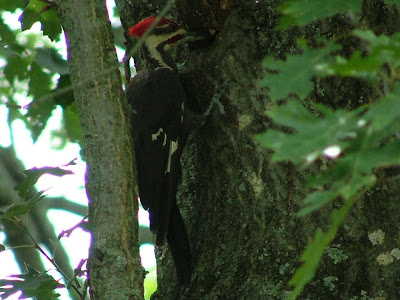 not the red that males sport! He has a marvelous call and drums to protect his territory and attract a life mate. Pileated Woodpeckers mate for life. They have the oddest hop as they move up and down the tree trunk...by the way...check out those claws!

In this photo he is either excavating a roost or going after bugs. 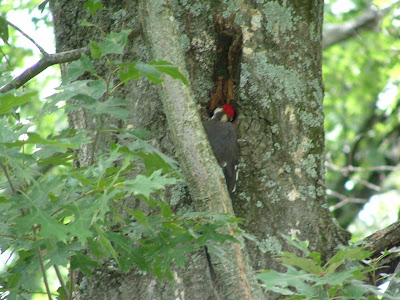 The photo is a bit blurry...it's all that digging in the tree!

The hole that he is digging is very characteristic of PWs; rectangular and deep. They dig deeply into the tree searching for carpenter ants. He will eat beetles, fruits and nuts, too, but they prefer carpenter ants. Ornithologists call the Pileated Woodpecker 'ecosystem engineers', because other birds and mammals depend upon the cavities of the Pileated Woodpecker for survival. The cavities provide nesting, housing and access to a food source. Since Mr and Mrs Pileated Woodpecker are non migratory birds...they dig an extensive roost and nesting site in large trees to provide shelter year round. The nests or roosts can be up to 2 foot in diameter with several doors.

Mr and Mrs are large birds, but still have to protect themselves and their offspring from predators like hawks, weasels, owls, snakes and even squirrels. Humans do pose some problems for these wonderful and shy birds. Some loss of habitat...when old growth trees are lost or dead trees are removed. But many woodpeckers are are actually killed by cars...either they fly in front of them or they are hit while searching for food on the side of the road.

Oddly enough, they are also killed by lightening striking the tall trees where they prefer to roost. This may explain where my pair disappeared. Our tallest and oldest oak tree was struck by lightening several years ago...about the time Mr and Mrs Pileated disappeared.

I hope that Pileated Woodpeckers are back in the neighborhood. I wish they would move into the oak tree...it's still there, move in ready. A condo on the top floor with a nice view and lots of good restaurants near by. 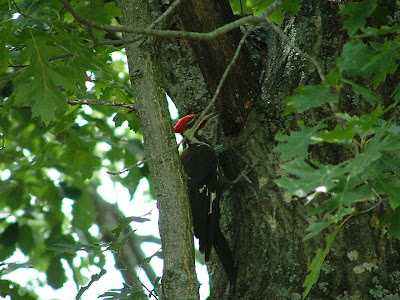 I've missed them in the garden.

Meems (HoeandShovel) has a post on her Pileated Woodpeckers. Tina and Skeeter (In The Garden) also have a post.If any other bloggers have posts let me know and I can link to you, too.

Now for something completely silly. Do you remember Woody Woodpecker? Woody is a cartoon Pileated Woodpecker and if you have a yen for an old cartoon memory go here.


*There is still hope that the Ivory Billed Woodpecker is alive in Louisiana.
Posted by Gail at 9:40 PM